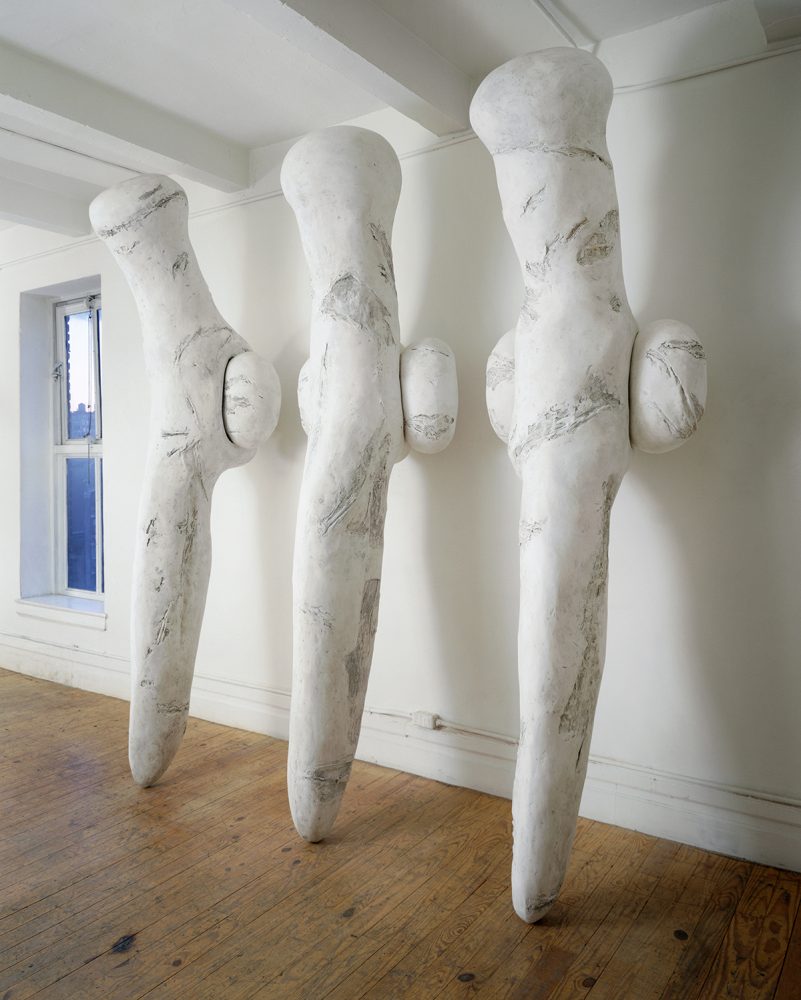 Shanks is an engaged sculptural work of three bow-like, tensile structures enjoined via three mounts (ball-and-socket articulations) to a wall. The work was first displayed in New Sculptures and Drawings, Unger’s 1997 solo exhibition at the Trans Hudson Gallery in New York. As critic Judith Page asserted at the time, “[Shanks] perfectly exemplifies Unger’s inclinations—rational yet connected to nature, serene but passionate, rigorously formed yet playful.” The vertical structures seem to gently “lean” into the mounts, lending each of the three individual compounds the appearance of resting against the wall. The tubular, bulbous nodes at the apex of the vertical elements contrast with their slim cylindrical tips, which come to rest just off the floor. This contrast in bulk and sculptural density across the work’s expanse provides an animate sense of contrapposto and mediation of shape. The overall effect of the nearly nine-foot, tripartite composition is one of uncanny, restless grace.

Mary Ann Unger was a curator and multidisciplinary artist noted for sculpture, site-specific installation, and architectural drawings evoking the organic geometries found in nature over self-imposed grids. Unger is perhaps best known for the sculpture made toward the end of her life: works at heroic scale fashioned of steel armature and overlaid with Hydrocal meant to evoke the body, bandaging, and bone. Born in 1945, Unger was raised in New Jersey and received an undergraduate degree from Mount Holyoke College in 1967 and an M.F.A. from Columbia University in 1975. Unger was the recipient of Pollock-Krasner Foundation grants in 1989 and 1995, received a Guggenheim Fellowship in 1992, and was a resident fellow at Yaddo in 1980 and 1994.