William Kentridge Prints and History of the Main Complaint

These two concurrent exhibitions: William Kentridge Prints and History of the Main Complaint, feature the breadth of William Kentridge (South African, b. 1955)’s artistic practice. The former includes 120 works on paper by this pioneering artist, while the latter animated film draws on his practice of charcoal and pastel drawing. Working in the tradition of socially and politically-engaged artists such as William Hogarth, Francisco Goya, Honore Daumier, and Kathe Kollwitz, Kentridge’s work reflects on the human condition, specifically the history of apartheid in his own country and the ways in which our personal and collective histories are intertwined.

William Kentridge Prints represents over a third of the output in the medium of printmaking for Kentridge. The work in this exhibition ranges from 1976 to 2004 and includes aquatint, drypoint, engraving, etching, monoprint, linocut, lithograph, and silkscreen techniques, often in combinations. Kentridge’s prints are rich in layering and restricted to black and white, with color accents added to selected images. The results are works that are powerful in the stark contrast of image to background in woodcuts and lithographs and subtle in linear and atmosphere with etching or monotypes.

History of the Main Complaint (1996) is a key animated film in Kentridge’s oeuvre. To create his animated films, Kentridge vigorously reworks charcoal and pastel drawings, leaving traces of erasure and redrawing. Each stage is filmed and then animated. Traces of what has been erased are still visible to the viewer and as the films unfold a sense of fading memory or the passing of time. Through this process, Kentridge constructs moral allegories that explore themes of love and betrayal, oppression and violence, death and regeneration. 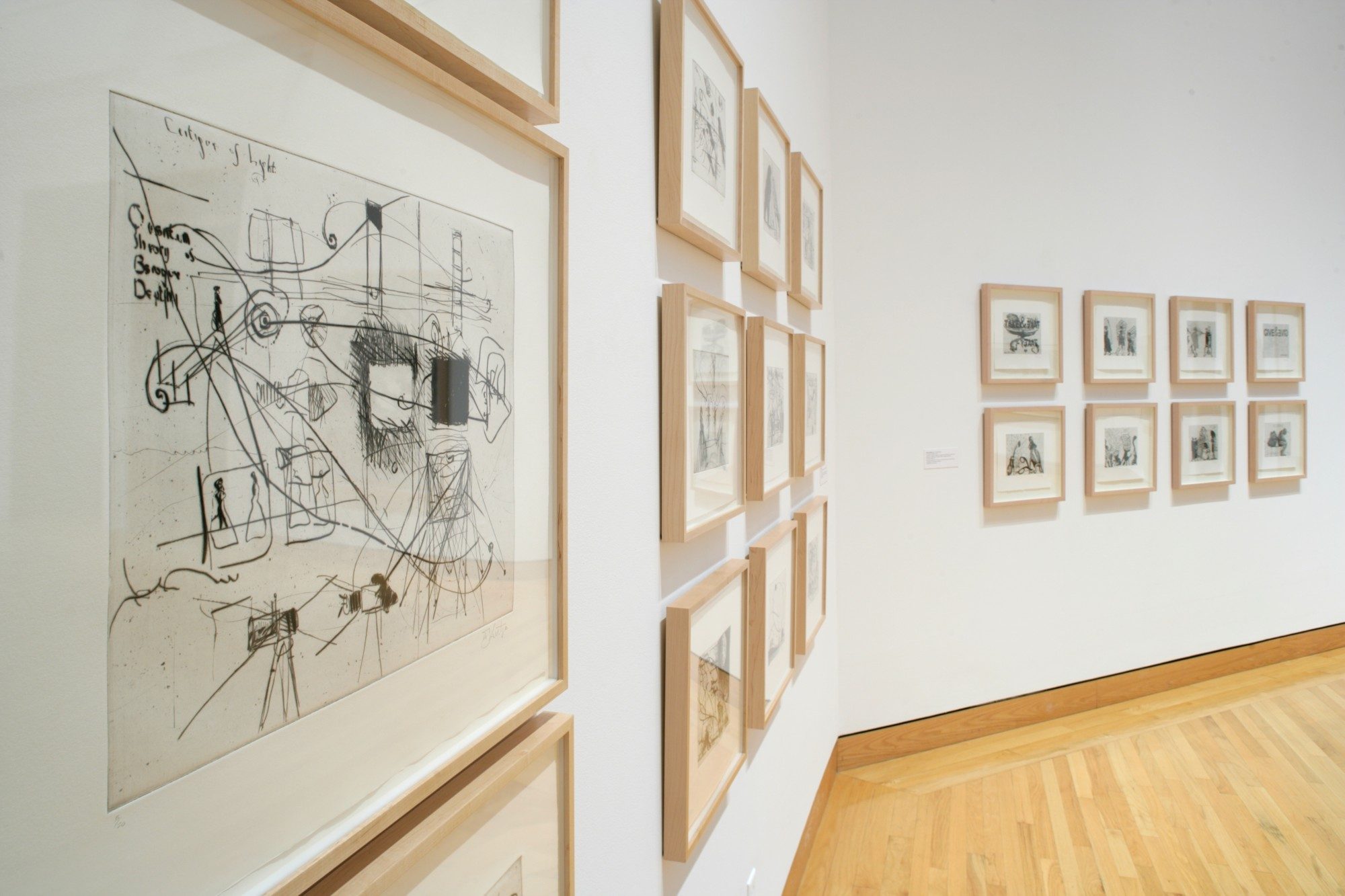 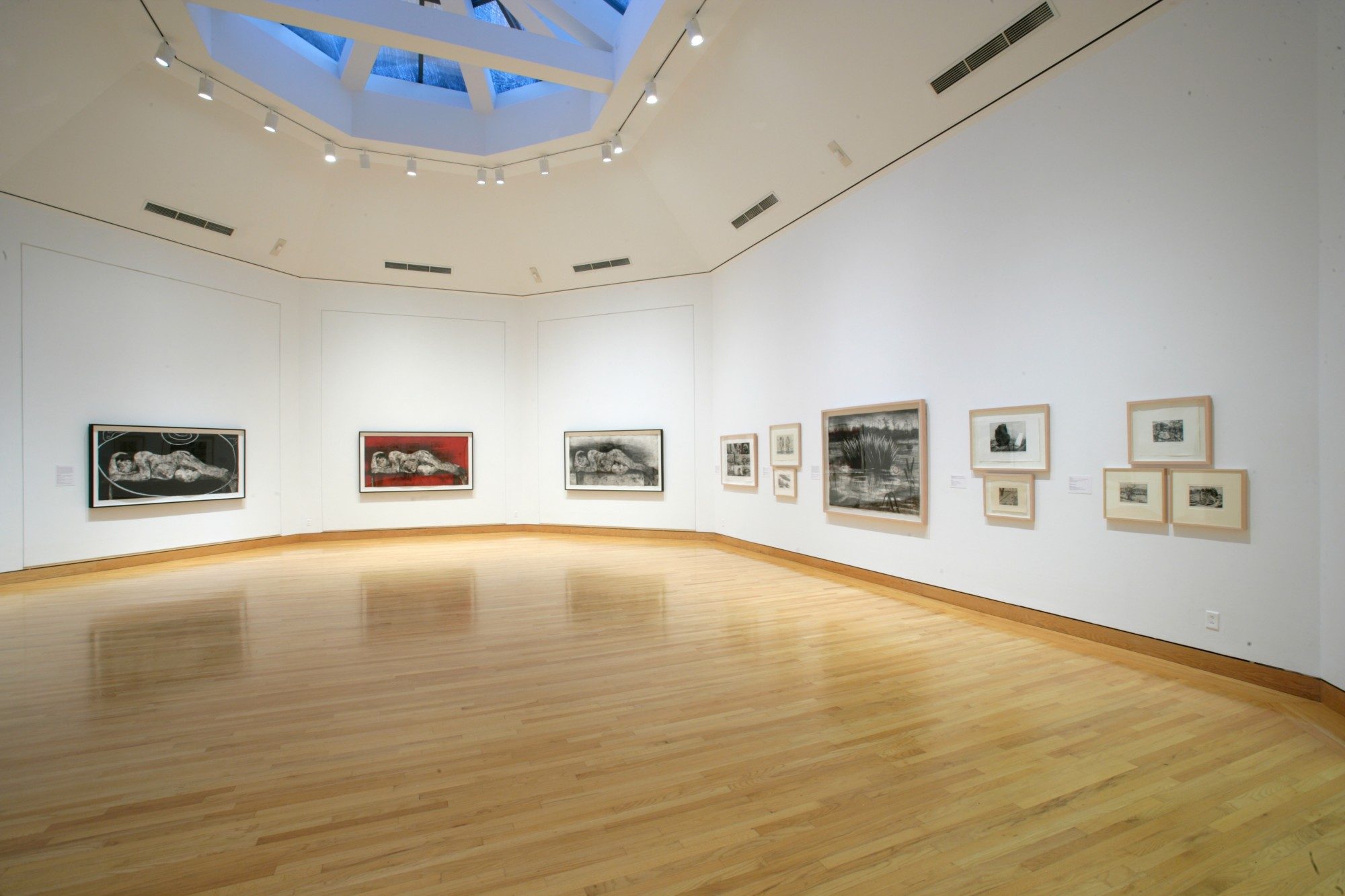 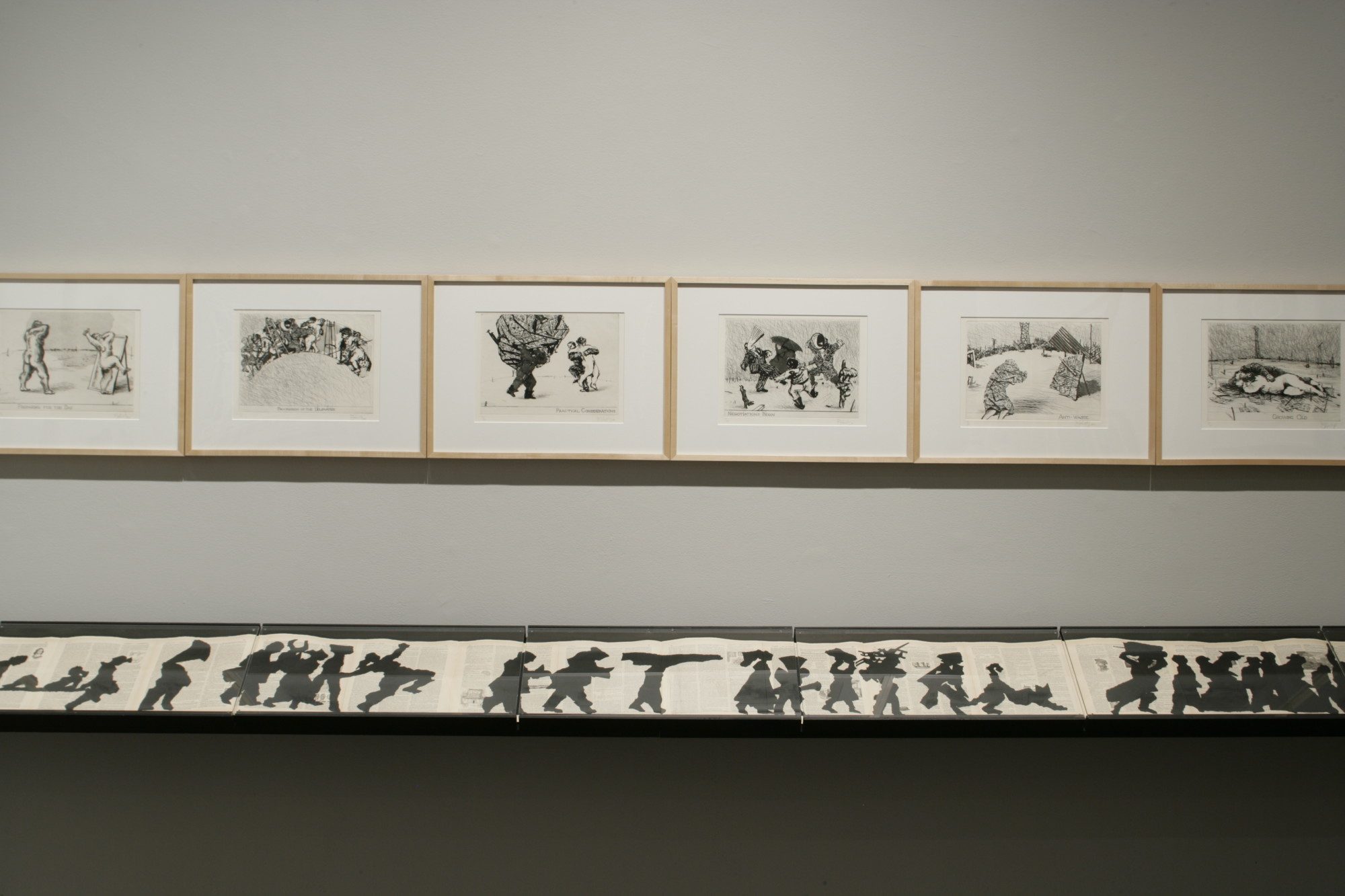 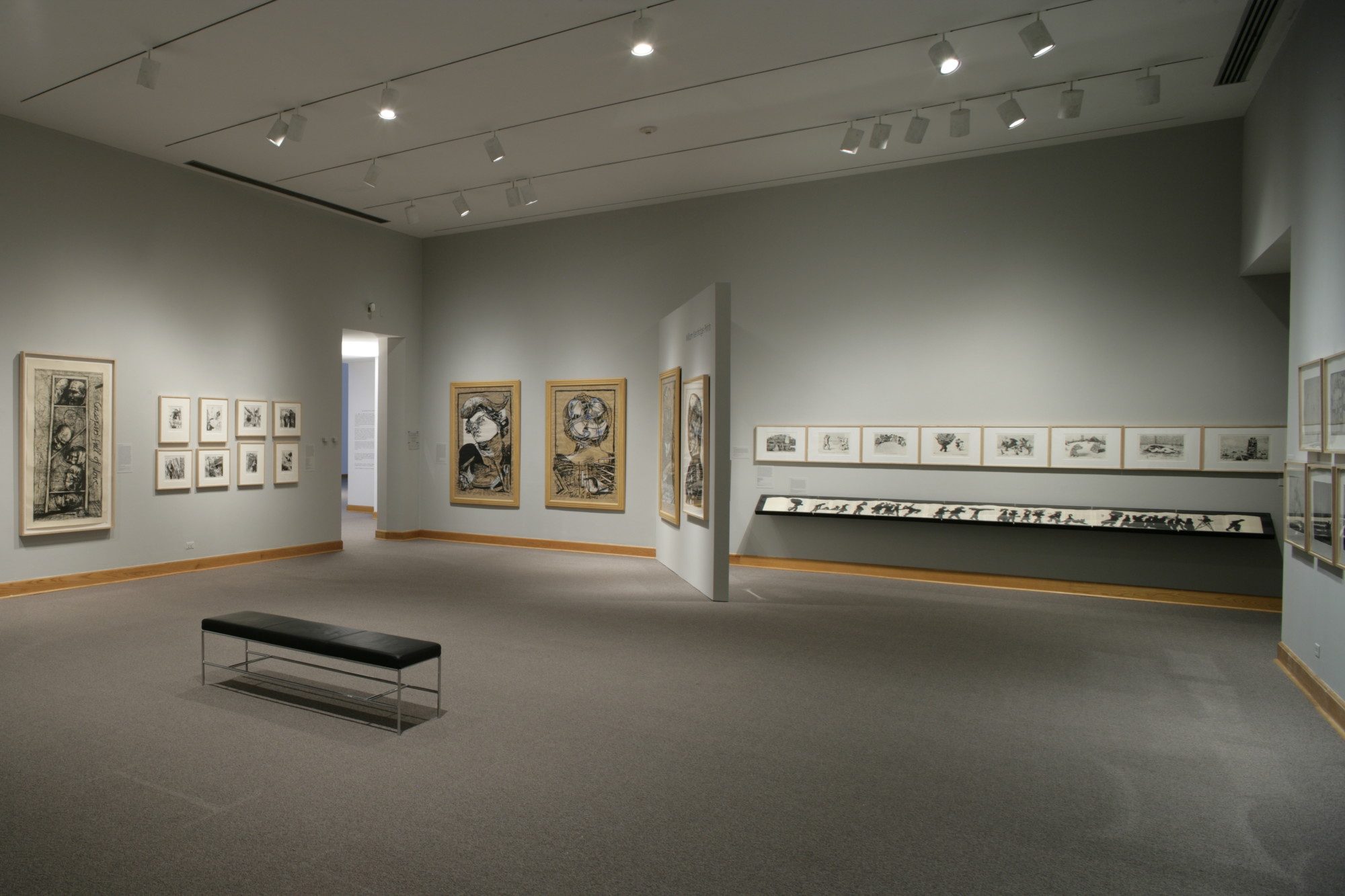 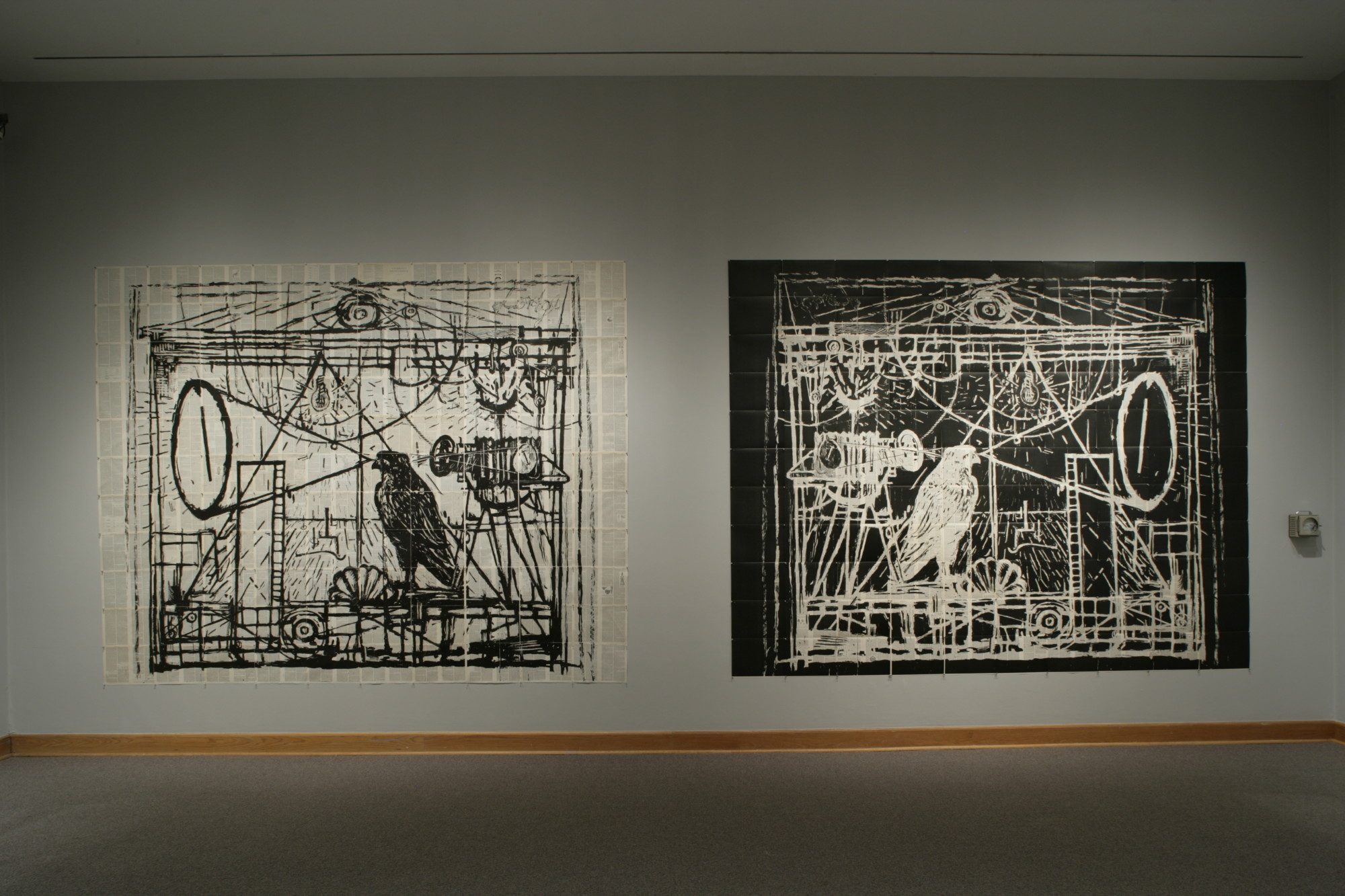 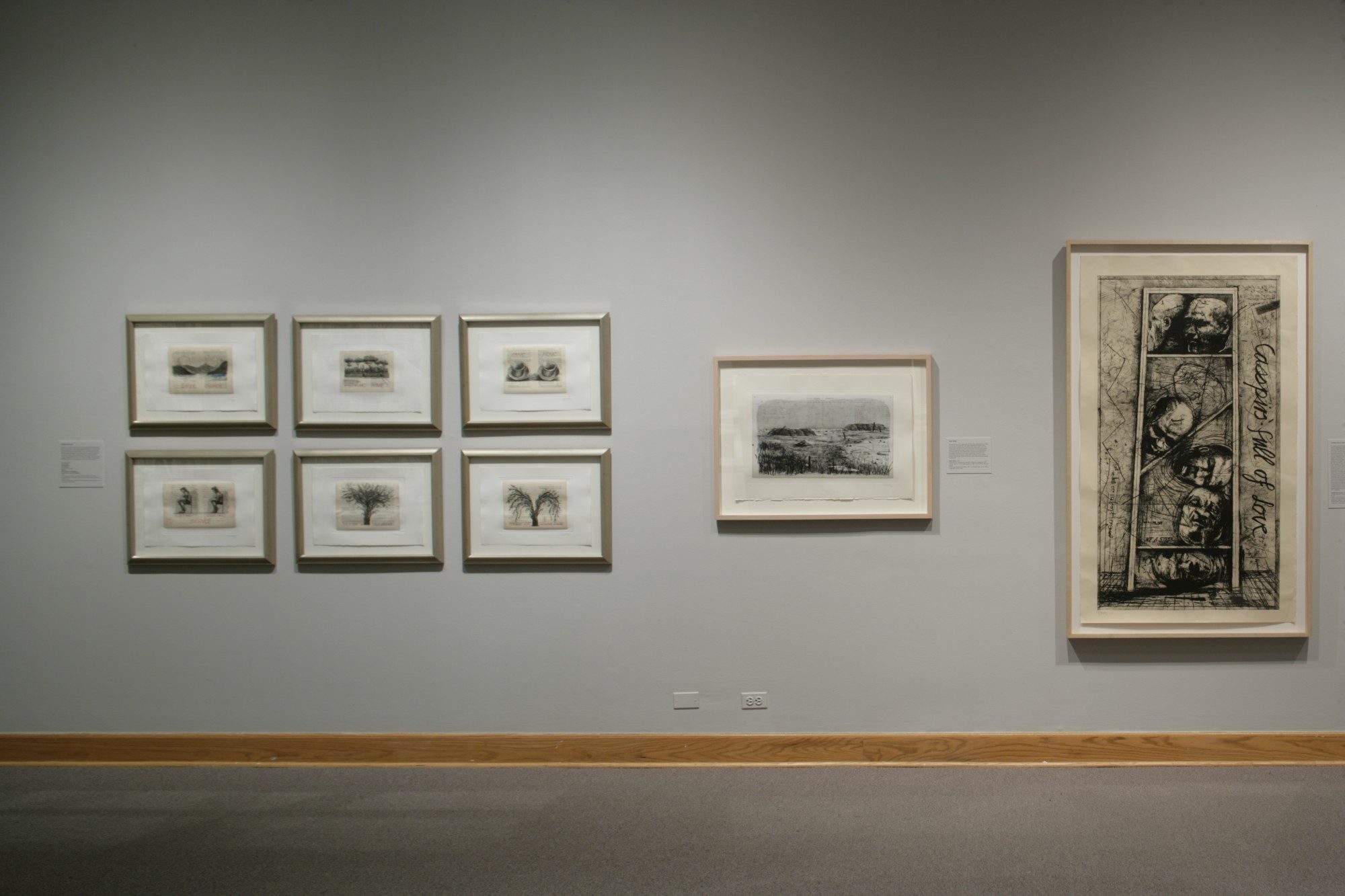 Born in Johannesburg, South Africa in 1955, Kentridge received a in Politics and African Studies at the University of the Witwatersrand and a diploma in Fine Arts from the Johannesburg Art Foundation. Between 1975 and 1991 he was acting and directing in Johannesburg’s Junction Avenue Theatre Company. In the 1980s he worked on television films and series as art director. He founded a theater company, studied mime and theater in Paris and, from 1982 to 1984, was art director for television series and feature films. In 1989, Kentridge began making short animated films by photographing his charcoal drawings with a video camera and altering them in minute ways to animate them. The political content and the unique techniques of Kentridges’ work have propelled him into being one of South Africa’s most significant artists.