Lisa Corrin, Class of 1956 Director, with assistance from June Gordon, Class of 2008 and Cynthia Way, Director of Education and Visitor Experience

Ten poets curate photographs from WCMA’s collection and wrote original poems in response, creating lyrical arrangements that explore how image and text resonate. The exhibition, and its accompanying interpretative programming, reflects a strand throughout the history of photography—from early pictorial work to contemporary artwork—in which photographs are derived from poems, compared to poems, or described in poetic terms. In this case, they inspired poems. Regional poets were invited to select their own images and arrange them according to their own “poetic logic.” The poet-curators’ juxtapositions of these photographic works promote new interpretations based on the visual and textual relationships that they set forward.

From 2006-2007, WCMA’s exhibitions celebrate the breadth of the museum’s holdings in honor of the publication of Encounter, the new handbook of the permanent collection. In addition to its staff curators, the museum has invited faculty, artists, students, and members of the community to reexamine the collection through a series of exhibitions that bring together works of art crossing cultures and time periods. 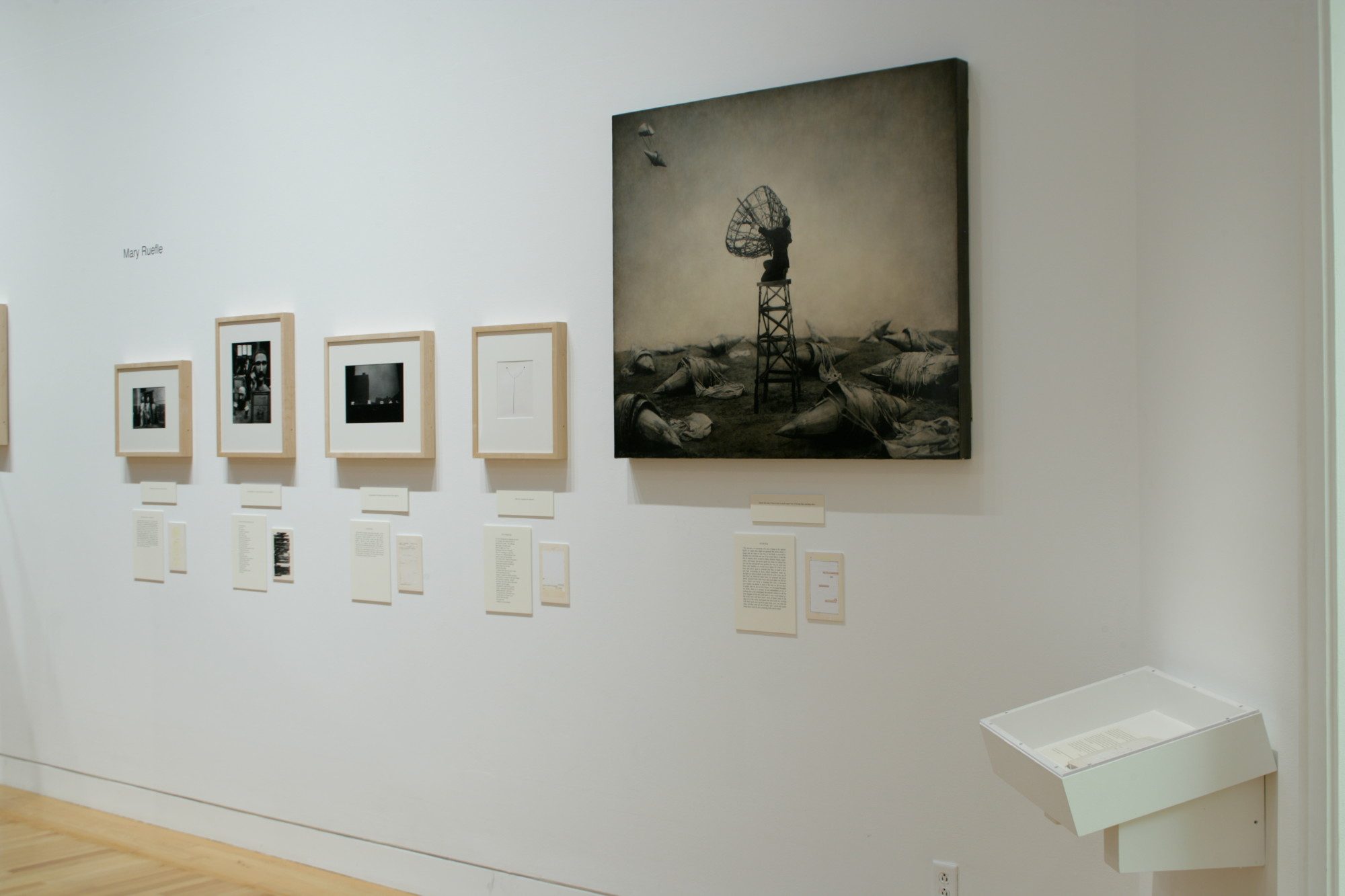 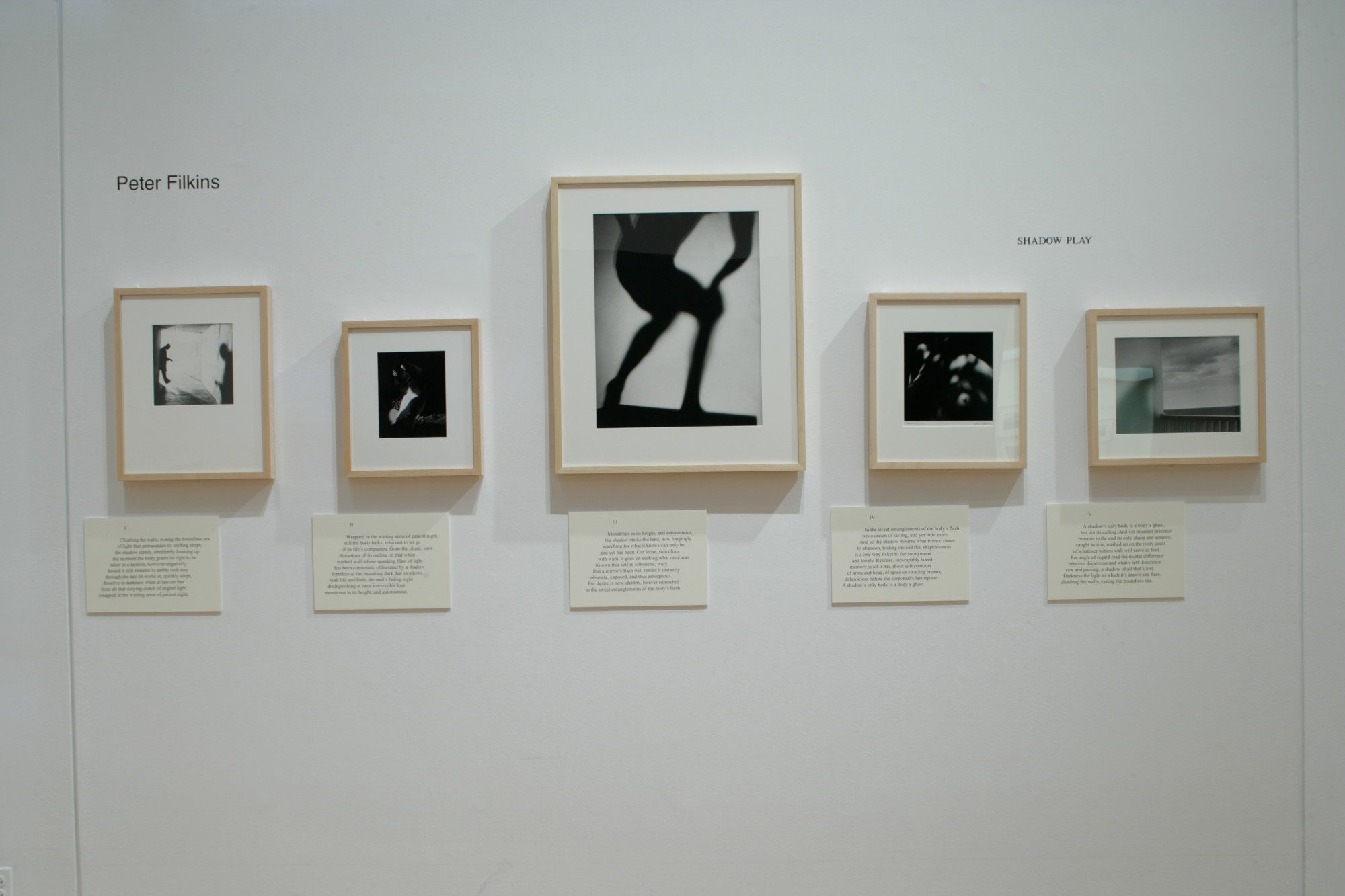 Trudy Ames received her M.F.A. from Bennington College. Her poems have appeared in The Southern Review, LIT, Under One Roof, Holding True, and Crossing Paths. She was a recipient of two National Endowment for the Humanities grants, three Olmsted awards, and a Horace Mann grant, all for pursuits in the study, teaching, and writing of poetry. She teaches English at Mount Greylock Regional High School in Williamstown, Massachusetts.

Rachel Barenblat holds an M.F.A. from the Bennington Writing Seminars. She is the author of three poetry chapbooks, most recently chaplainbook (2006), a collection arising out of her experiences in hospital chaplaincy. Her two previous collections are What Stays (2002) and the skies here (1995). Her poems have appeared in numerous periodicals and anthologies, including Phoebe, The Jewish Women’s Literary Annual, Holding True, and The Texas Observer. Her work can be found online at her blog, Velveteen Rabbi. She is co-founder and former executive director of Inkberry, a literary arts center in North Adams. She is currently a student in the Aleph rabbinic program.

April Bernard is a poet, novelist and essayist. Blackbird Bye Bye won the Academy of American Poets Walt Whitman Prize in 1989; her subsequent volumes of poetry are Psalms (1993) and Swan Electric (2002). A novel, Pirate Jenny, was published in 1990. Her essays, poems, and reviews have appeared in The New York Review of Books, The New Yorker, The New Republic, The New York Times Book Review, and other journals; her poems have been included in the anthologies The Penguin Book of the Sonnet, Great American Prose Poems, and the recent American Religious Poems, edited by Harold Bloom. She has been a Visiting Fellow at the Whitney Humanities Center at Yale University and has received a Guggenheim award. After many years as a magazine and book editor in New York City, she now teaches literature at Bennington College in Vermont, where she is also on the faculty of the M.F.A. writing program. She grew up in Williamstown, Massachusetts and is a graduate of this town’s public schools and of Harvard University, where she earned her B.A.

Cassandra Cleghorn received her B.A. from the University of California, Santa Cruz and her Ph.D. from Yale University. Her poems have appeared in numerous journals including the Paris Review, Yale Review, Western Humanities Review, Southwest Review, and Seneca Review. She was a Massachusetts Cultural Council Artist Grant Finalist in Poetry in 2000. She has taught at Williams College in Massachusetts since 1990 where she is Senior Lecturer in American Studies and English. Her most recent project is a collaboration of poetry and music. The quartet, Merge (comprised of Cleghorn, saxophonist Erik Lawrence, drummer Allison Miller, and bassist Rene Hart), issued the CD Merge in October and have begun performing in clubs and colleges.

D. L. Crockett-Smith received his Ph.D. from the University of Chicago. Since 1980, he has taught at Williams College as professor of American Literature. He is best-known for his work on Mark Twain, African American culture, and the Black Arts Movement. He was co-editor, with Jack Salzman and Cornel West, of the Encyclopedia of African American Culture and History. At Williams, he has served several terms as Chair of African American Studies, and he was Dean of Faculty from 1996 to 2000. He was also Director of the W. Ford Schumann Performing Arts Endowment from 2000 to 2005. Crockett-Smith is the author of Cowboy Amok and Civil Rites. He is working on a sequel to Cowboy Amok, tentatively titled Day of the Dude. His poems have appeared in several anthologies. He has appeared in numerous solo and group readings and has been a featured guest on radio and television shows. Since 1981, he has hosted a weekly radio program, “Let the Music Speak,” on WCFM. He lives in Berkshire Village.

Peter Filkins is the author of two books of poems, What She Knew (1998) and After Homer (2002). He is also the translator of Inbegorg Bachmann’s collected poems, Darkness Spoken (2006), as well as her novels, The Book of Franza and Requiem for Fanny Goldmann (1999). He is the recipient of a Berlin Prize Fellowship in 2005 from The American Academy in Berlin, a Fulbright grant to Austria, and an Outstanding Translation Award from the American Literary Translators Association. His work has appeared in numerous publications, including The New York Times Book Review, Poetry, Partisan Review, The New Republic, The American Scholar, and The Los Angeles Times Book Review. He teaches writing and literature at Simon’s Rock College of Bard in Great Barrington, Massachusetts.

Lawrence Raab was born in Pittsfield, Massachusetts. He received his B.A. from Middlebury College, and his M.A. from Syracuse University. He has received the Bess Hokin prize from Poetry magazine, a Junior Fellowship from the University of Michigan Society of Fellows, and grants from the National Endowment for the Arts and the Massachusetts Council on the Arts. His collection of poems, What We Don’t Know About Each Other, won the National Poetry Series and was a Finalist for the 1993 National Book Award. His sixth and most recent volume of poetry, Visible Signs: New & Selected Poems, was published in 2003, and a seventh collection, The History of Forgetting, has recently been completed. He teaches literature and writing at Williams College, where he is the Morris Professor of Rhetoric.

Mary Ruefle is the author of nine books of poetry, most recently A Little White Shadow (2006), an art book of erasures; Tristimania (2003); Among the Musk Ox People (2002); Apparition Hill (2001); Cold Pluto (2001); Post Meridian (2000); Cold Pluto (1996); The Adamant (1989), winner of the 1988 Iowa Poetry Prize; Life Without Speaking (1987); and Memling’s Veil (1982). She is the recipient of a National Endowment for the Arts Fellowship, a Guggenheim Fellowship, an American Academy of Arts and Letters Award in Literature, and a Whiting Foundation Writer’s Award. She currently teaches in the M.F.A. program at Vermont College.

Barbara Tran received her B.A. from New York University and her M.F.A. from Columbia University. She is the author of In the Mynah Bird’s Own Words, coeditor of Watermark: Vietnamese American Poetry & Prose, and guest editor of the Michigan Quarterly Review special issue Viet Nam: Beyond the Frame. Barbara’s honors include a Bread Loaf Writers’ Conference Scholarship and Lannan Foundation Writing Residency. Her poems have appeared in Pushcart Prize XXIII and The New Yorker.

John Yau is an art critic, essayist, editor, poet, and prose writer. He received his B.A. from Bard College and his M.F.A. from Brooklyn College. The author of more than thirty books, his most recent collection of poetry is Paradiso Diaspora (2006). His books of criticism include The Passionate Spectator: Essays on Art and Poetry (2006); The United States of Jasper Johns (1996), which was translated into French and German; and In the Realm of Appearances: The Art of Andy Warhol (1993). His collaborations with artists have been exhibited at Volume (New York), Kevin Bruk Gallery (Miami), and the Museum of Modern Art (New York). Yau’s honors include a Guggenheim Fellowship, Lavan Award from the Academy of American Poets, the Jerome Shestack Prize from the American Poetry Review, and grants from the National Endowment for the Arts, the New York Foundation for the Arts, and the General Electric Foundation. He currently teaches at Mason Gross School of the Arts (Rutgers University).