In this hybrid gallery-classroom classes across disciplines investigate the relationships between works of art and key course concepts. Professors teaching courses from Mathematical Modeling to The Mughal Empire: Power, Art, and Religion in India select objects from the collection to be displayed for the semester. During this seventh iteration students working in Object Lab will create guided tours in Russian, write weekly papers in response to African art objects, and compose ekphrastic poetry. 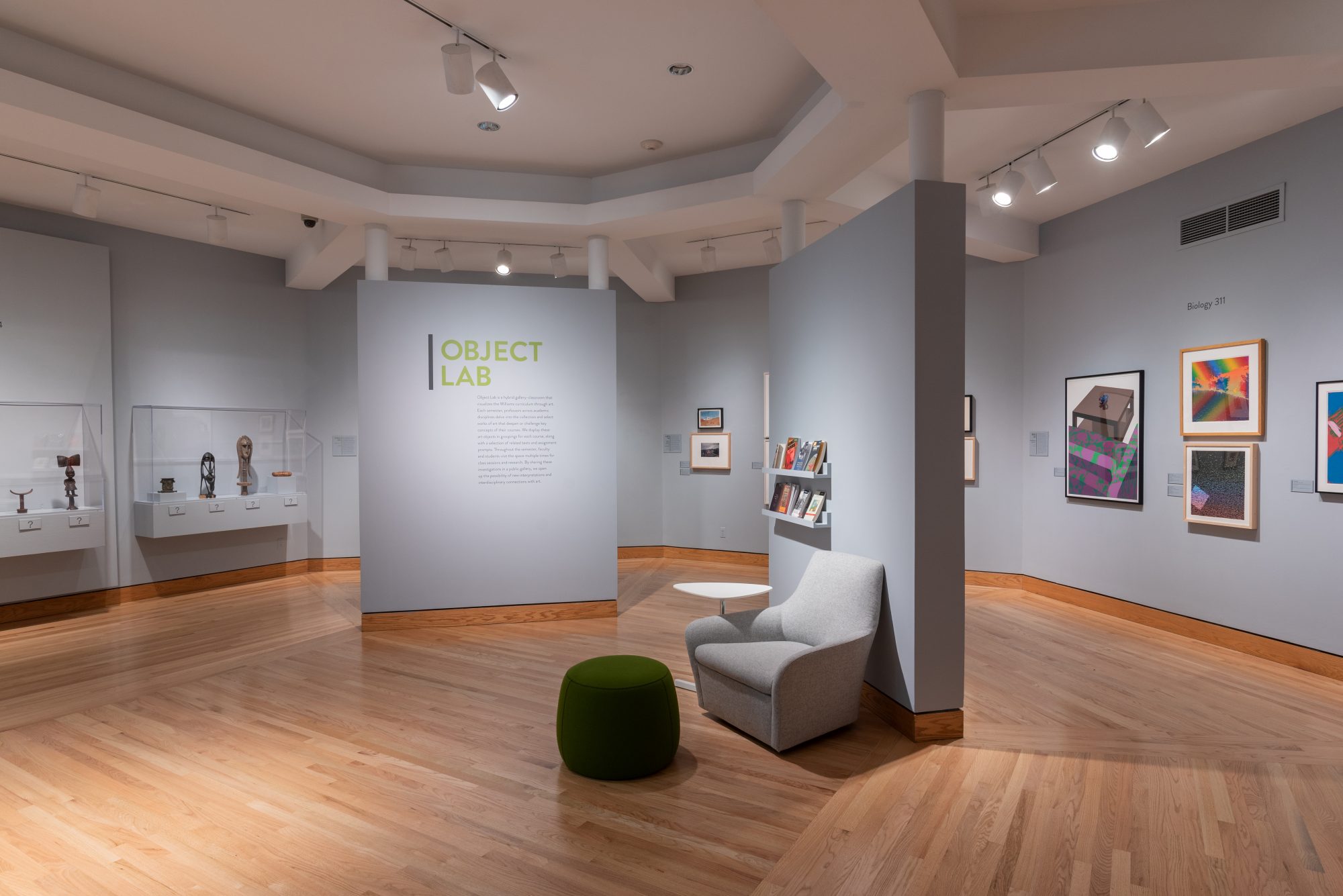 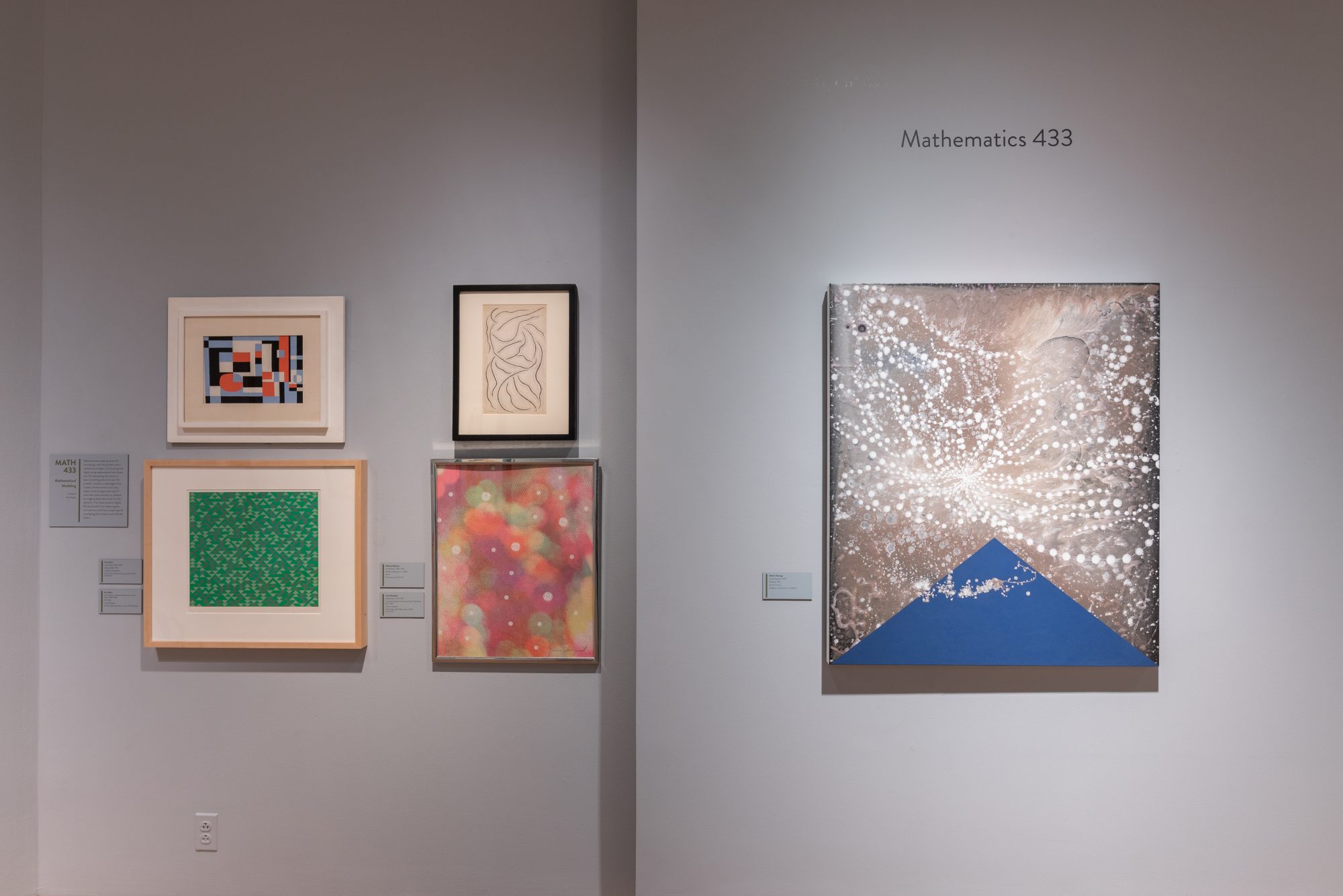 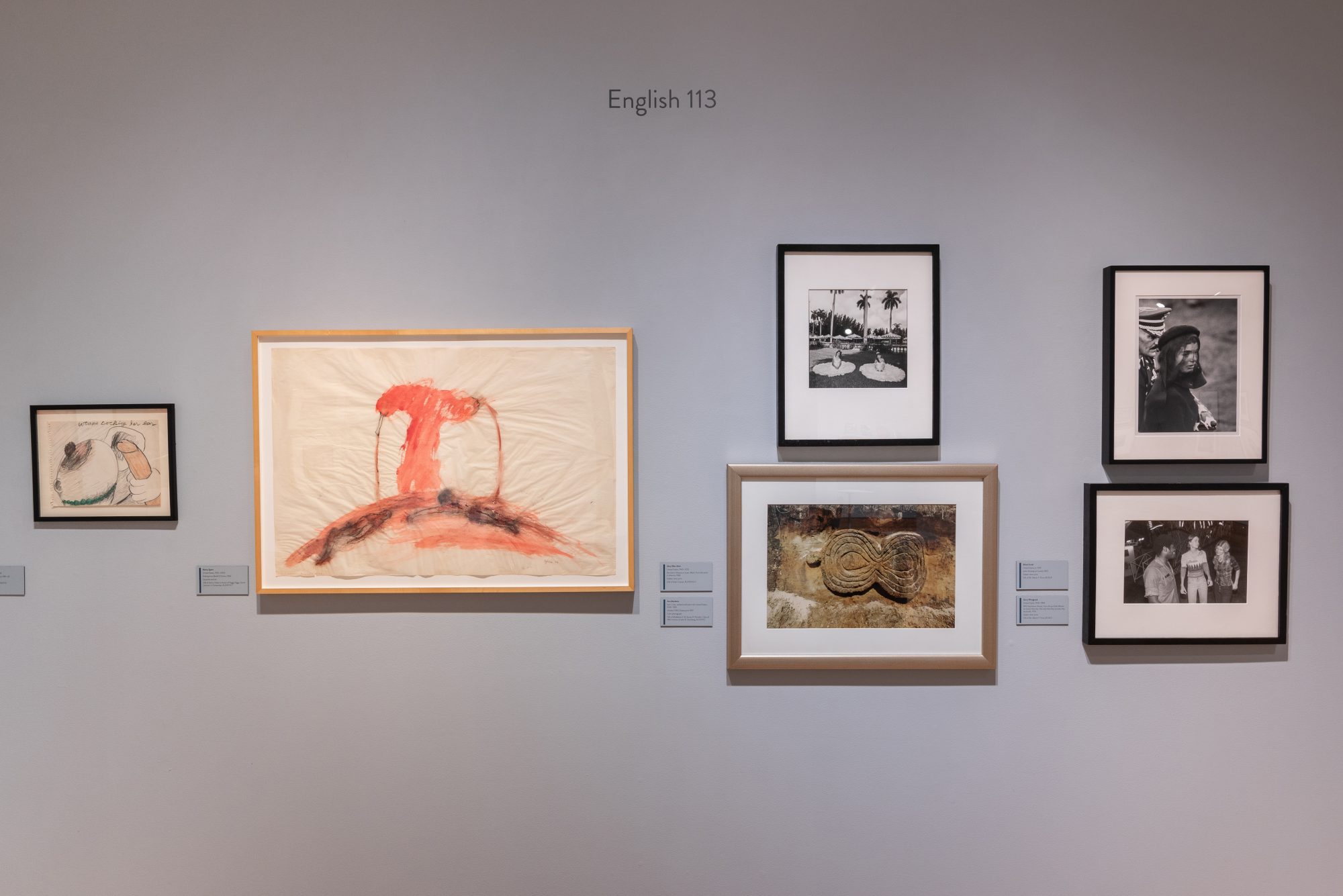 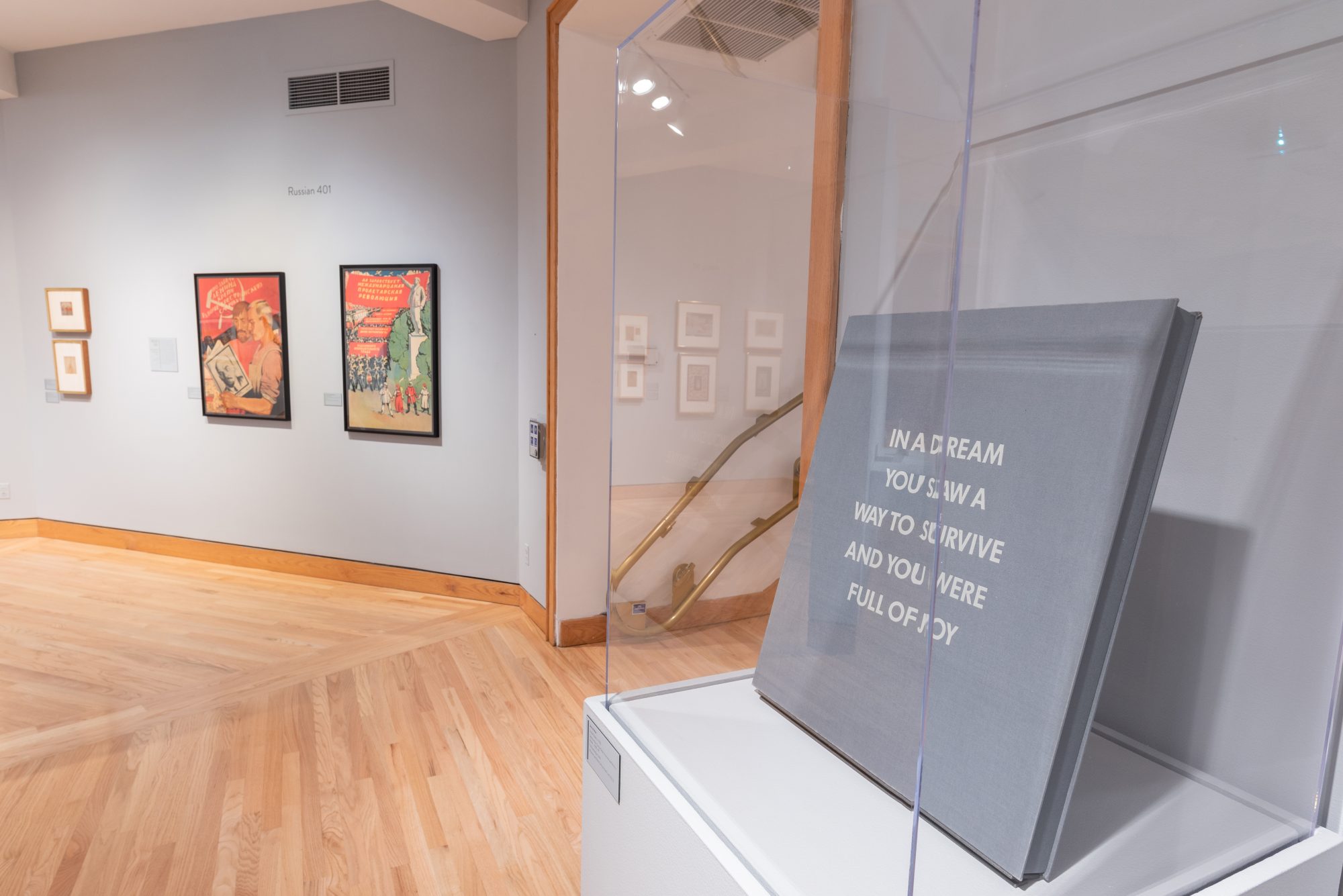 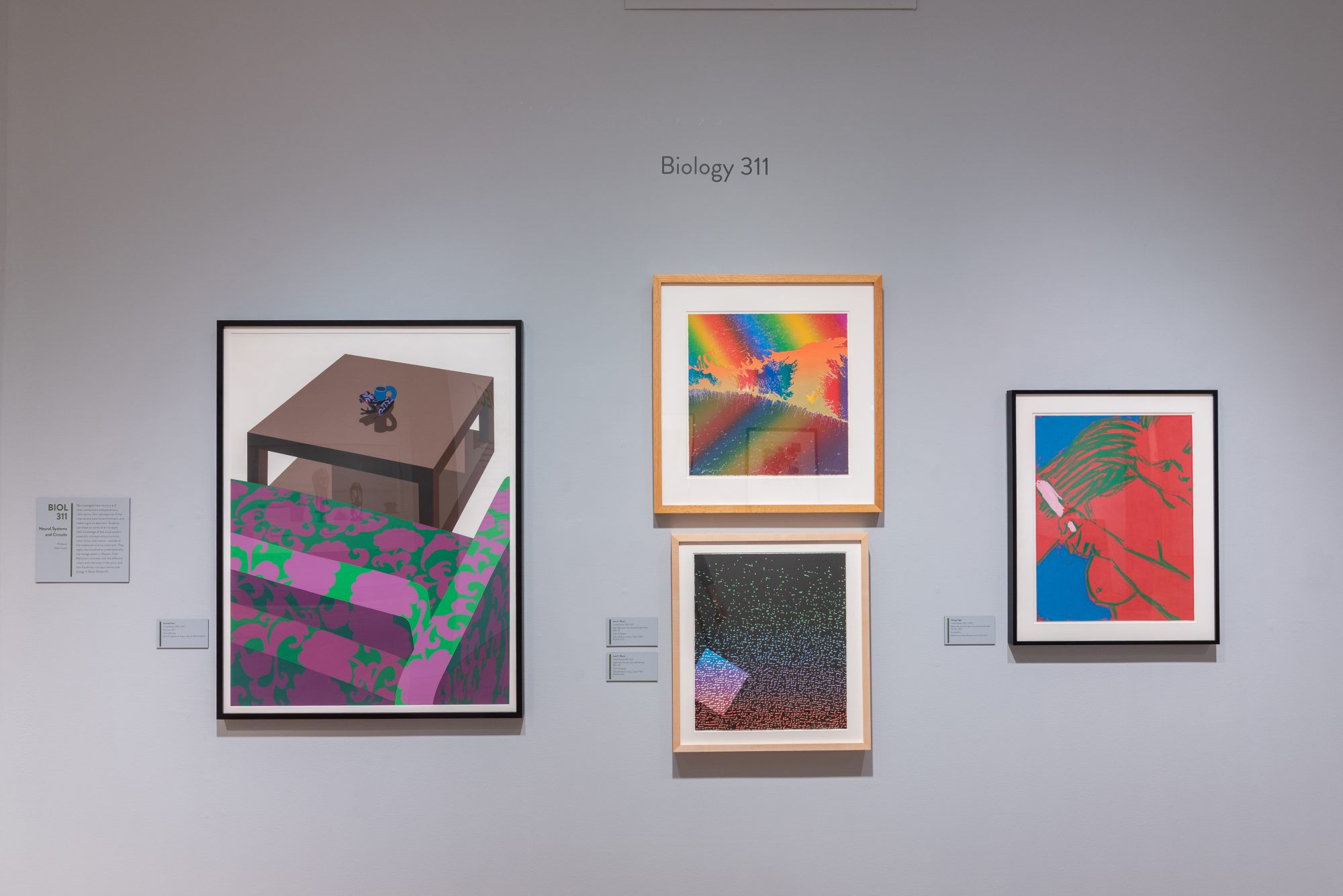 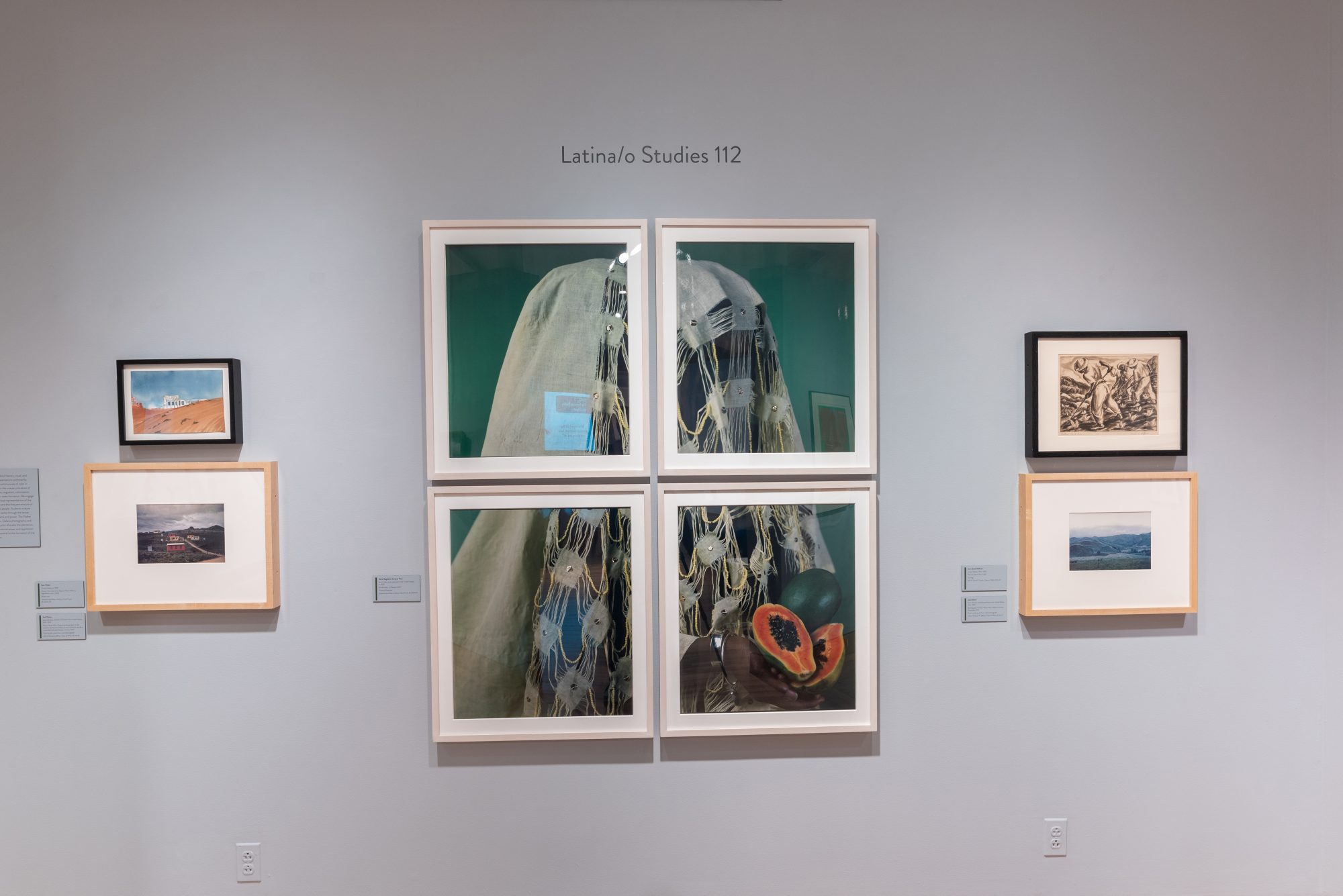 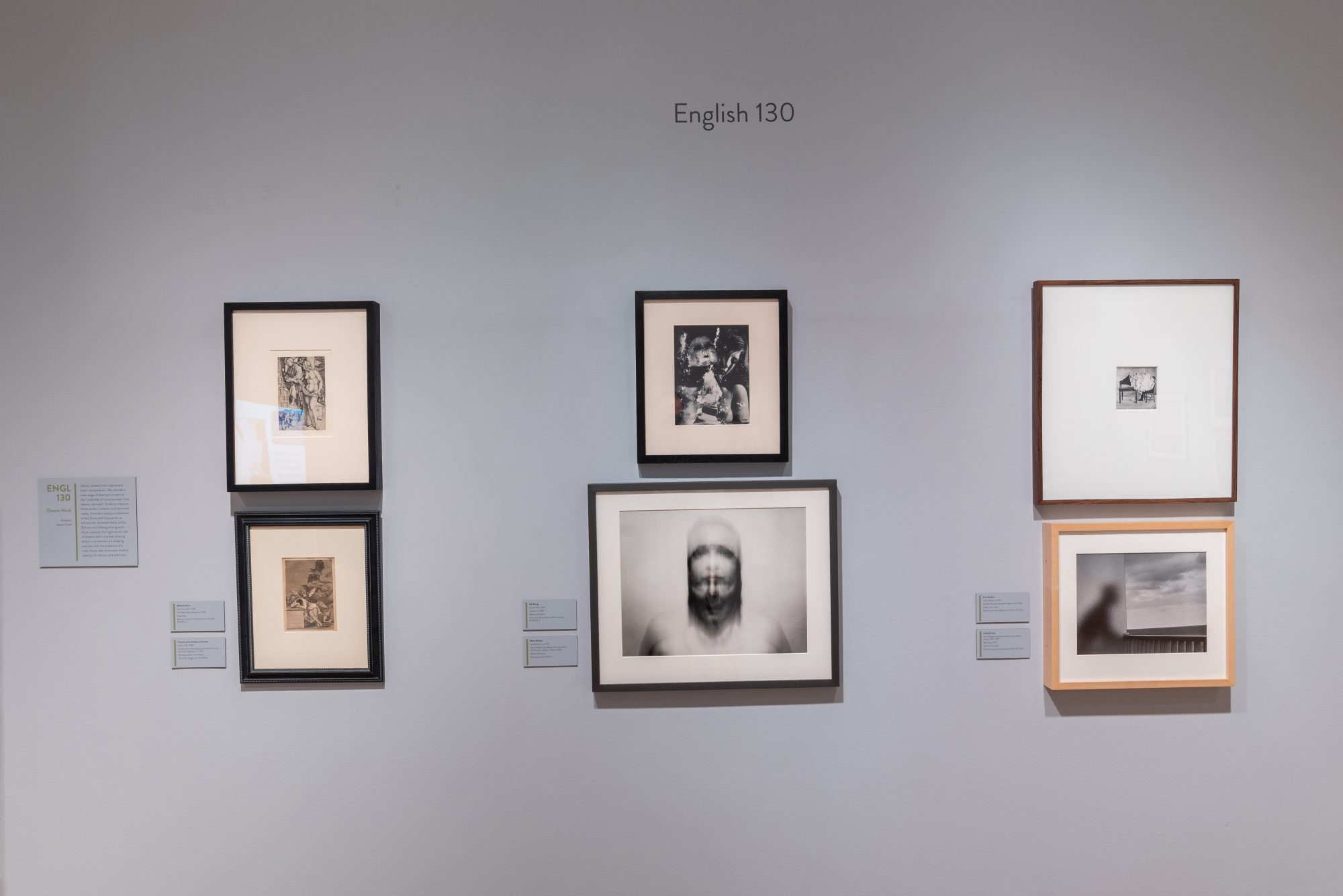 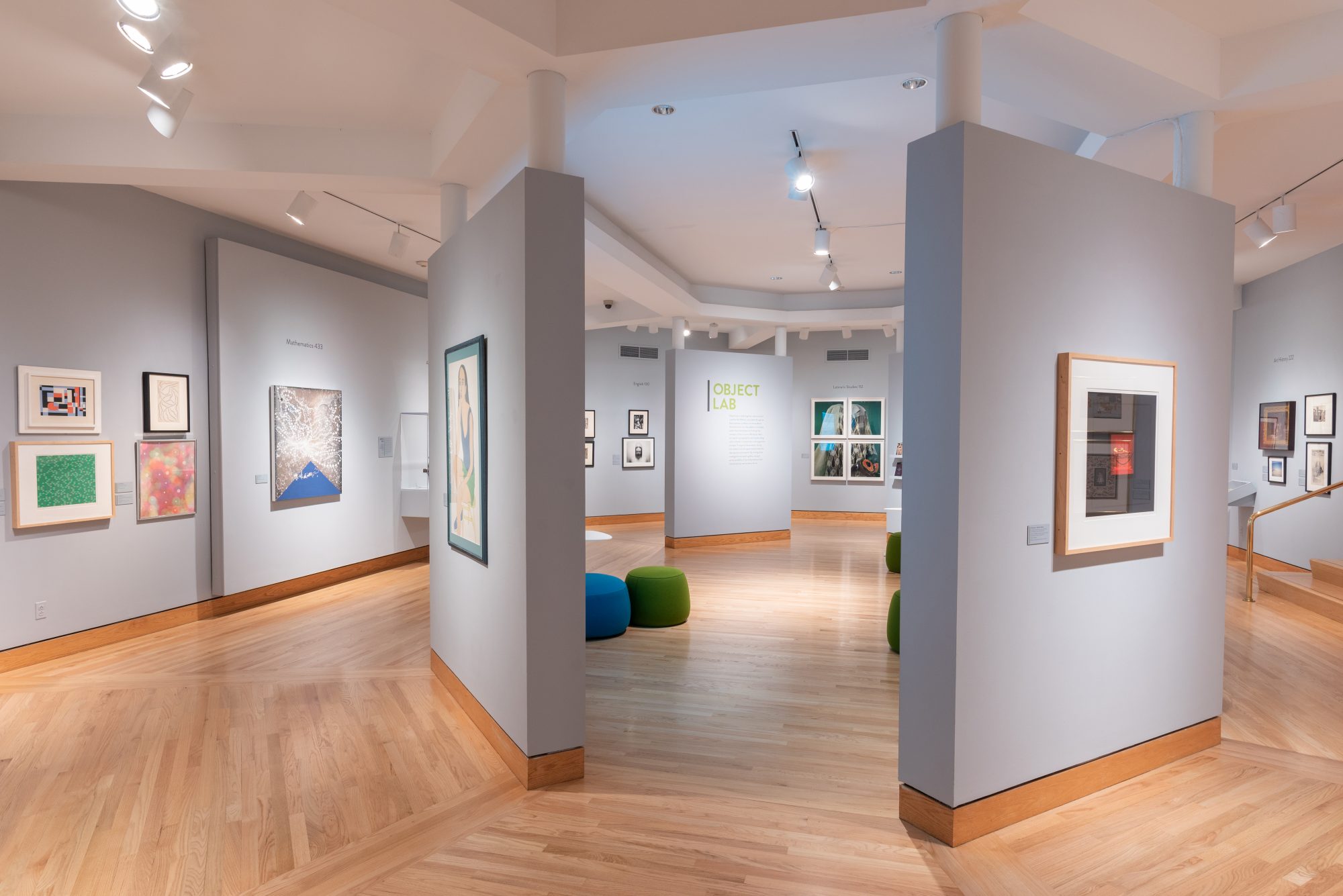 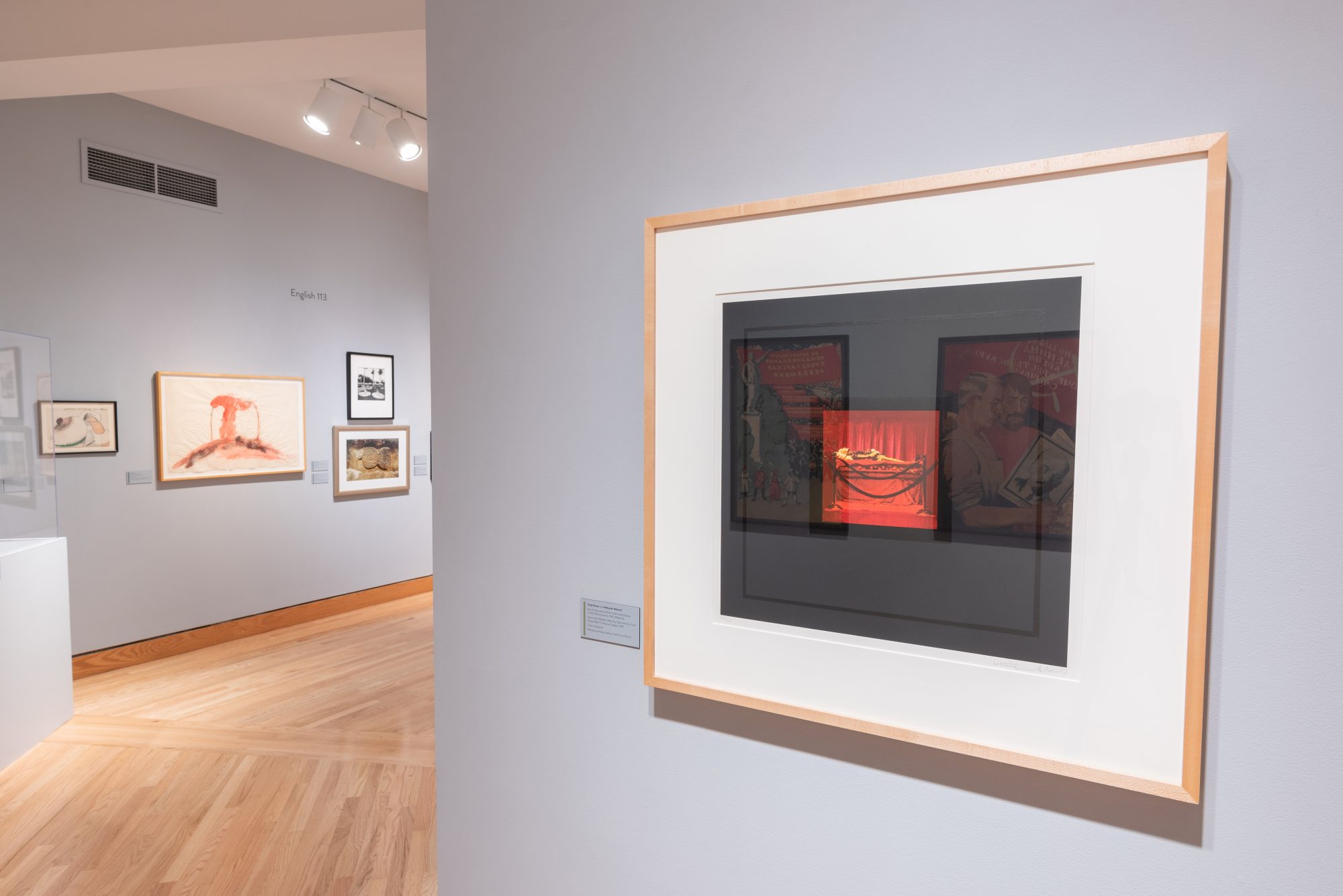 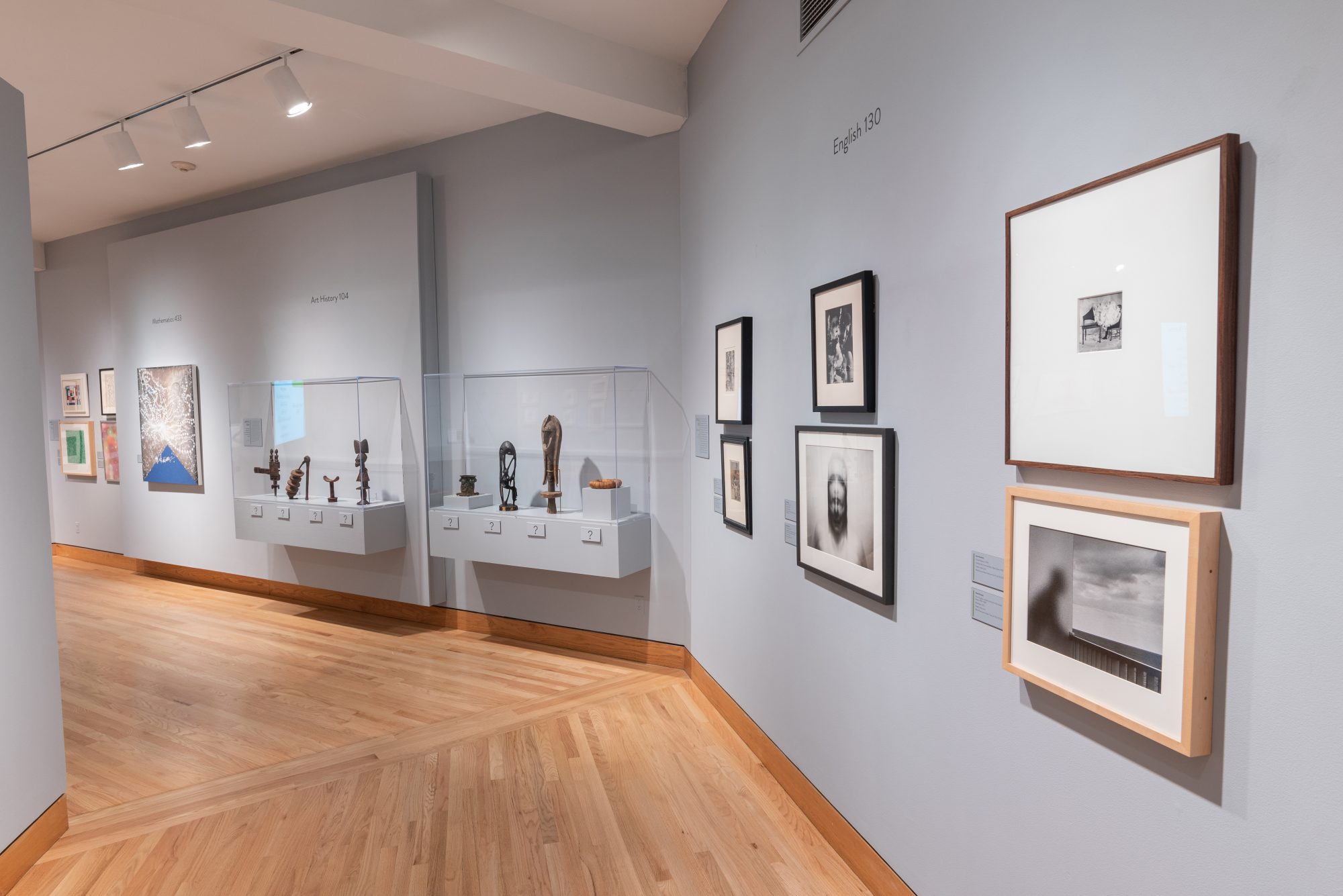 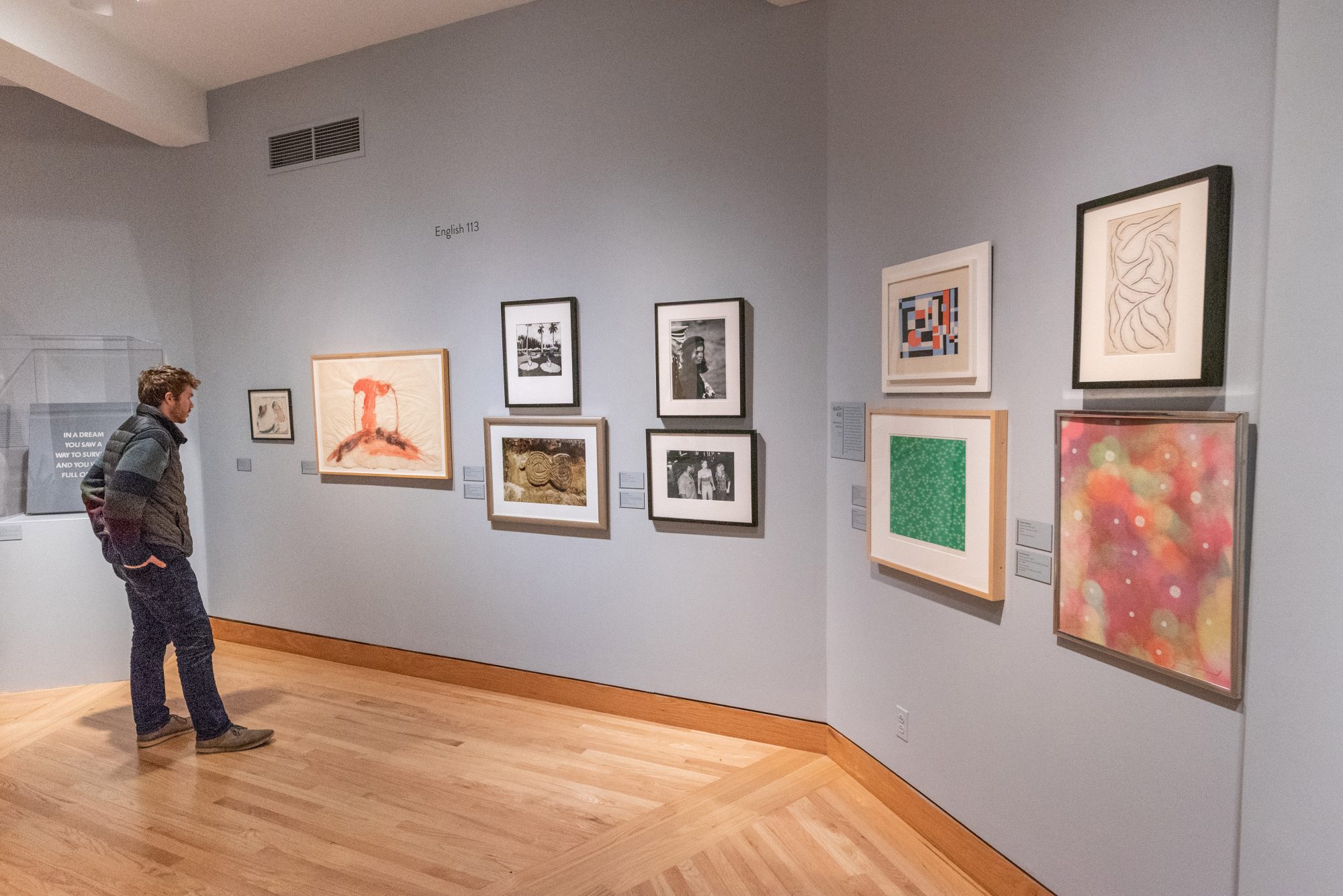 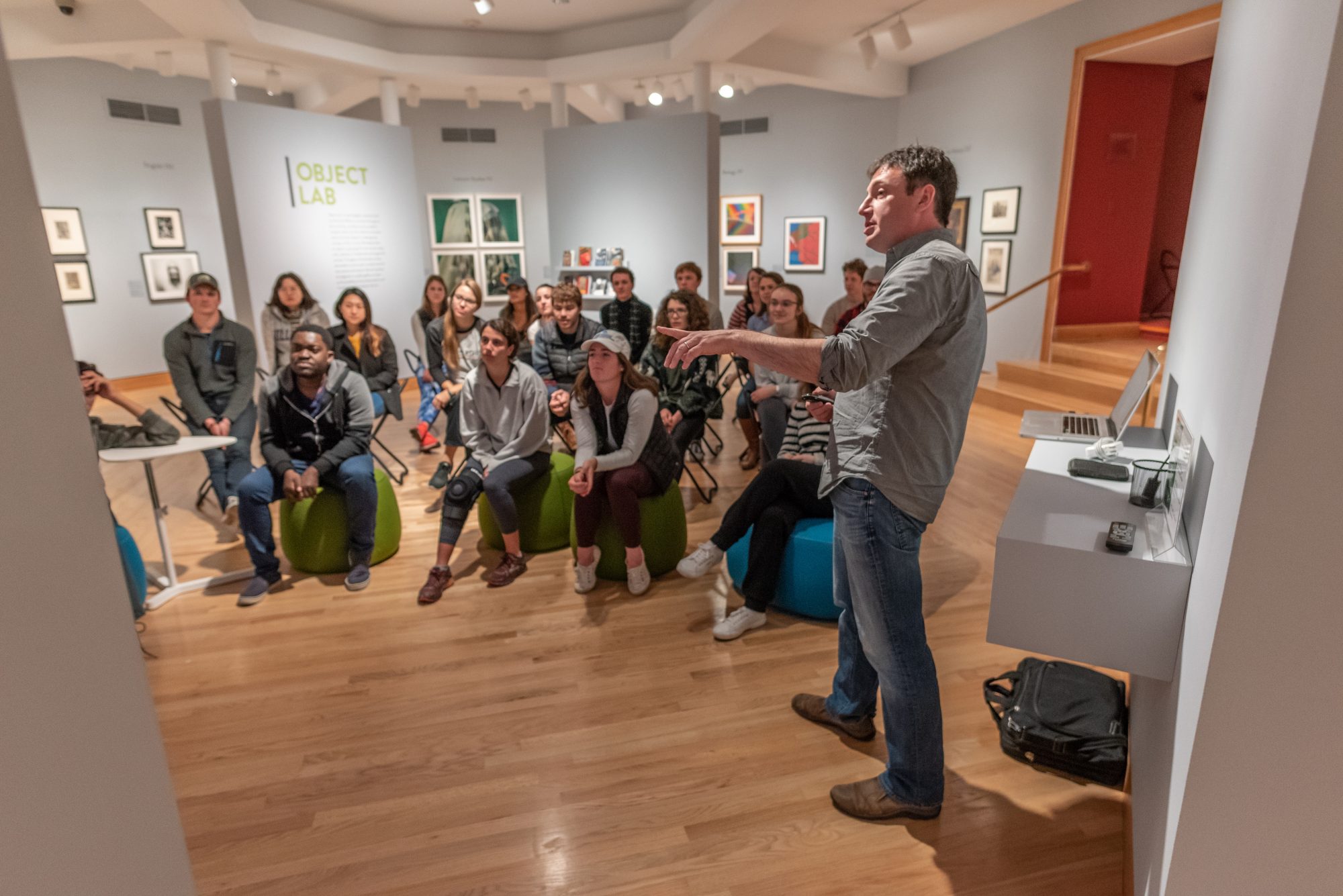 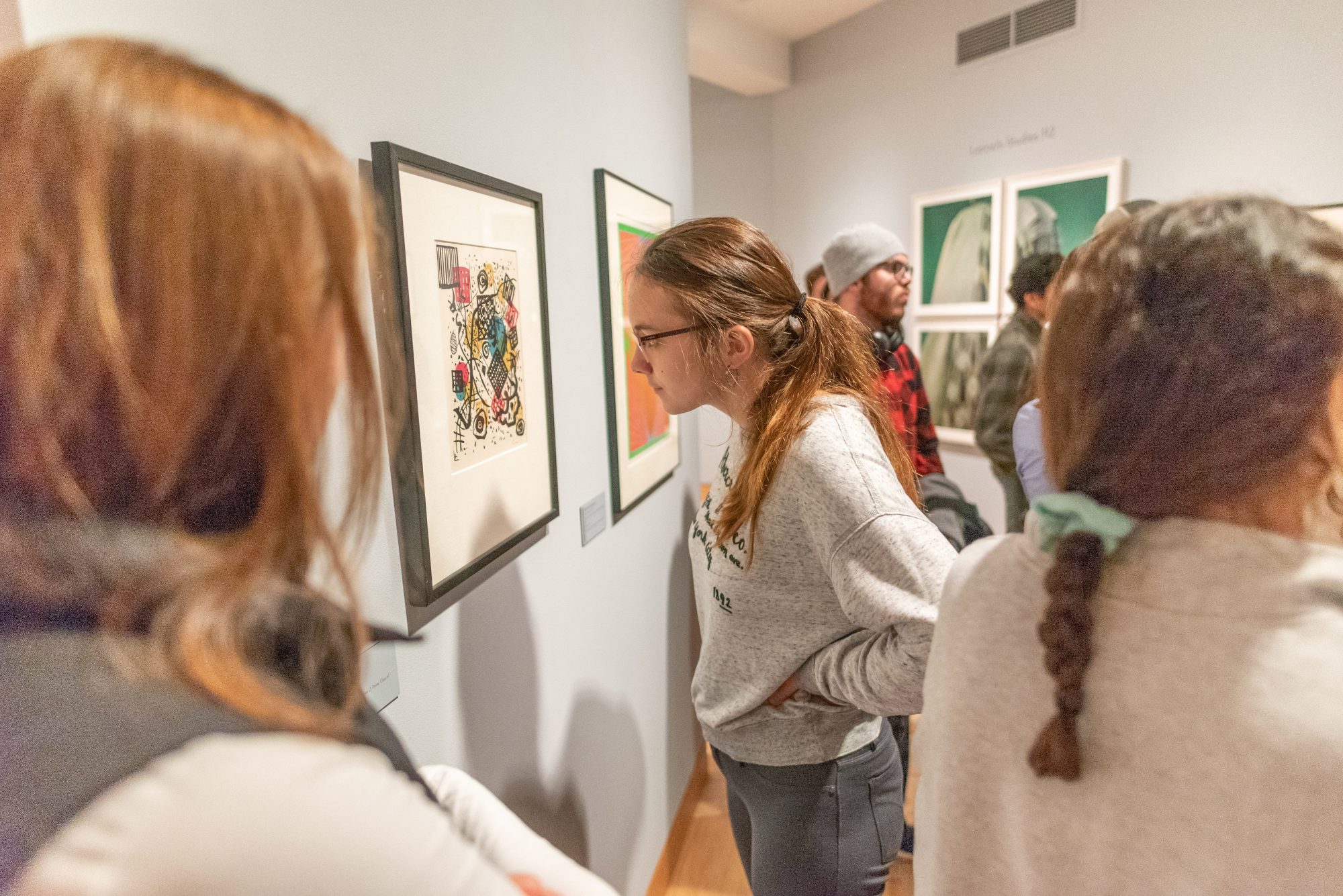 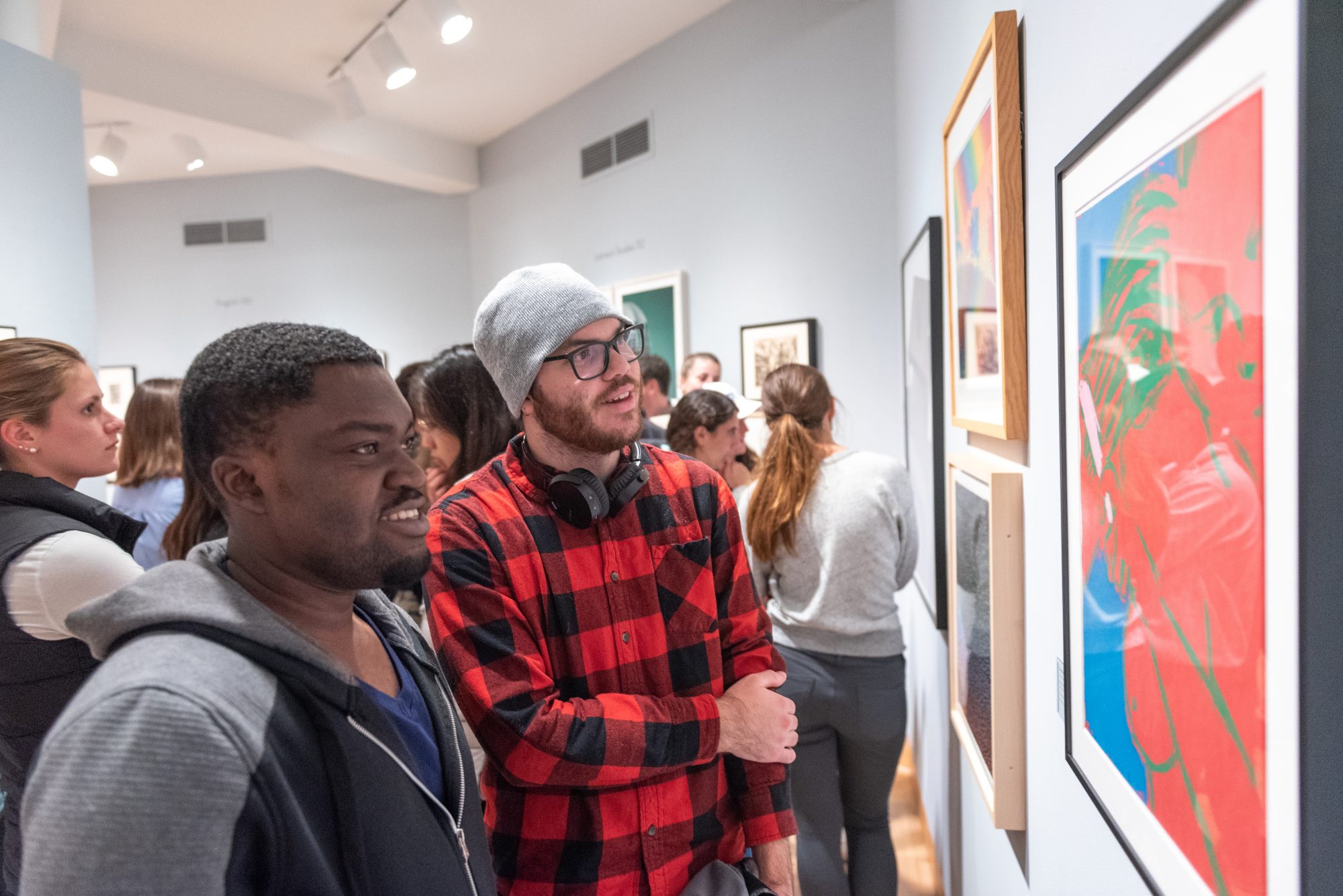 ARTH 104
Materials, Meanings, and Messages in the Arts of Africa, Professor Michelle Apotsos

We investigate the power and diversity of expressive forms that characterize the arts of Africa. Students keep a journal where they sketch and record visual observations about one of these objects each week. They speculate how the object might feel, smell, and sound, and make an educated guess about how it functioned in its original context. Students are not given any information about these objects–even the labels are hidden from them; instead they rely solely on sensory observation and critical thinking to guide their interpretations.

Photography has been deployed by many in the Middle East: colonial forces, indigenous populations, cosmopolitan travelers, photojournalists, and artists. In this course, we explore the resulting archives that document people, places, and communities in diverse ways. We also consider representations of individual regions over time. The selection on display here, for example, includes various images of Egypt. For their final project, students research a place of their choice to identify patterns of representation, and assemble an online exhibition to share with the class.

We investigate how neurons and their connections analyze sensory information, form perceptions of the internal and external environment, and make cognitive decisions. Students use these six works of art to apply their knowledge of the visual system–especially concepts about contrast, color, focus, and motion–outside of the traditional science classroom. They apply neuroscience to understand why the orange splash in Wayne’s Solar Refraction contrasts with the different colors and intensities in the print, and how Kandinsky conveys motion and energy in Kleine Welten #5.

We map the alliance between feminist politics and the feminist poetry movement in the 1960s through the early 1980s. Students make connections between poetry and art, and write a poem inspired by one of these works. In one assignment, students read Cynthia Macdonald’s poem Objets d’Art alongside Lozano’s Woman Cocking Her Ear, considering how wordplay can shock and make us think about language. Lozano literally interprets a familiar idiom; Macdonald describes a girl who gets called “a real ball cutter” and responds by collecting testicles as art objects.

Like art, dreams both require and resist interpretation. We consider a wide range of attempts to capture the “underside of consciousness” that dreams represent. Students interpret these works in relation to dreams and reality, from the insidious undertones of the Dürer and Goya prints to the blurred, distorted reality of the Bohnen and Telberg photographs. Dürer presents the nightmarish side of dreams with a monster blowing bellows into the ear of a sleeping man but, with the presence of a nude Venus, also showcases dreams’ capacity for fantasy and seduction.

This course traces the Mughal Empire in India from the early 1500s to 1857, focusing on the intersection of power, patronage of art and architecture, and religion. Comparing A Prince with Ladies on a Terrace with Madonna and Child, students investigate representations of women and court life. Students also use portraits of Shah Jahan, the Mughal ruler who commissioned the Taj Mahal, and noblemen to better understand how the movers and shakers of the Empire were visualized. These images demonstrate the artistic and imperial values that intertwined in painting under Mughal patronage.

We think about literary, visual, and sonic representations authored by and about communities of color in response to the uneven processes of racialization, migration, colonization, and nation-state formation. We engage different visual representations of the Caribbean and the frequent erasure of indigenous people. Students analyze these five works through the lenses of labor, land, and power. The Walker watercolor, Delano photographs, and Hoffman print all evoke the plantation, a site of colonial power and oppression that was central to the formation of the Caribbean.

Mathematical modeling means (1) translating a real-life problem into a mathematical object, (2) studying that object using mathematical techniques, and (3) interpreting the results to learn something about the real-life problem. Students create algorithmic models of these works of art: they select a work and generate a set of rules that, when carried out, produce an image qualitatively similar to their selection. They have access to digital files but benefit from observing the art in person, and from comparing and contrasting their chosen work with the others.

This seminar, conducted in Russian, focuses on the construction of the Lenin myth through different texts and media. Students analyze these three representations of Lenin’s image and examine them in relation to classical poems, children’s stories, folklore, and film. They consider the mythologizing of Lenin as parallel to the construction of a saint, focusing on how these works reference scripture, sculpture, and access to his actual body. Students will give a tour at the end of the semester for other Russian classes.

Meet our new Class of 1956 Director Pamela Franks and celebrate our fall exhibitions: The Field is the World, Kay Sage: Serene Surrealist, Anicka Yi: Our Love Is Bigger Than an AIDS Quilt, Diana Al-Hadid: Delirious Matter, and Object Lab.