Hover over a point on the interactive map to learn more about the photograph captured there. Click a point to go to the online catalog listing for that work. Click the rectangle frame icon in the lower right corner of the map to use the full-screen version.

In the months after the Landmarks exhibition opened in January 2020, Curator of American Art Horace Ballard and Postdoctoral Fellow for Digital Humanities Beth Fischer completed this interactive digital visualization of the photographs in the exhibition by location. Landmarks: A Digital Map helps us think about a major subset of the WCMA collection anew.

On an immediate, macro level, the mapping suggests a visual correlation between the photographs in the exhibition and the major cities of the world, providing evidence to our anecdotal understanding of the collection’s strength in documentary, post-human, and the early-street photography of the twentieth century. The interactive map also collapses a sense of the timeline of the history of photography as a medium and art form: digital images, black and white works shot on film, and ambrotypes rest side-by-side within their region. We hope that as you explore the tool and hover over specific dots, regional relationships between images and photographers will evoke recognition and surprise.

While recognizing that this creates the illusion of greater specificity than really exists, exhibition curator Horace Ballard and Postdoc Digital Humanities Fellow Beth Fischer have assigned each image in the show a single point marking its latitude-longitude coordinates. This creates the illusion of greater specificity than really exists, even when we can determine exactly where the photographer stood. This is the case in Edward Steichen’s photograph of the Flatiron Building. The image taken from the point on the map represents a wider field of vision than the map’s dot conveys. But in most cases, we cannot determine even that much. Most points on the map represent a broader region (e.g. a city or county) and not a specific positioning of the artist’s body in space-time. The Tableau visualization does not show the ratio or spectrum of our certainty or uncertainty as would an embodied viewer, or the cultural associations mapped to verbal names of places. This is why we’ve included a textual description of the identity of the place in the caption. 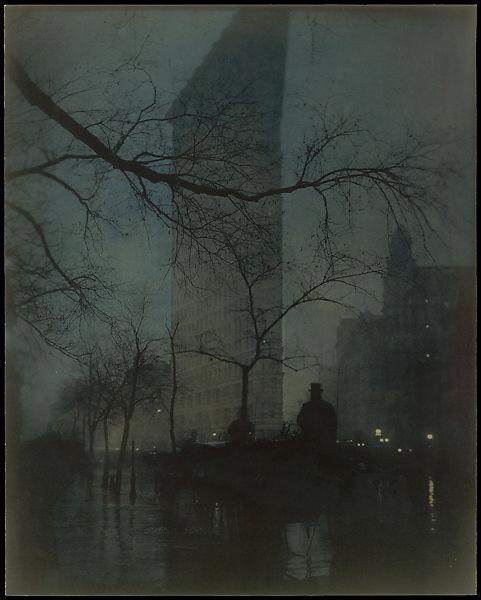 Using Google Streetview, we can reconstruct the precise spot Edward Steichen would have stood to capture this 1904 image of the Flatiron Building, but the point on the map cannot capture the place visible in the photograph.

In looking at the computational data the images contain, some rather important questions and necessary choices have arisen for us that we want to share with you. For example, is it best practice to link a photograph to the date and place it was “taken”, or the date and place it was printed and “made” into an art object? In our gallery labels, we try to include both dates if we know them. In this forum, we’ve categorized by the date and place the photograph was “taken” as it positions a photographer, regardless of national origin, at a specific place in the world.  A photograph’s very nature is to attune our senses by delineating our gaze. While the topography of the Earth continues beyond national borders, the photograph frames the world for our perception. The photographic frame around a specific “landmark” seemed sufficient.

Another choice is how to account for locations that are not known, are known but are not integral to the artist’s intention for the photograph, or may no longer exist. The titles of some works specifically call out the date and place the image was taken. Other photographs provide images of iconic landmarks that were thought to be so recognizable that no location data is attached to the image via its title or the object file in the museum. For some images, either the artist, artist’s estate, or gallery from which the work was purchased may not wish the location to be identified, even if something in the image specifically indexes or indicates a location. Many of these images wish to provide a poetic connection between the photographer and the viewer, hoping that like its literary cousin, the specificity of the photograph opens a more universal or “every-place/anyplace” rumination. There are also photographs in the exhibition that are untitled and selected from a larger series, in which atmospheric conditions of time of day, or emotional tone or affect across the larger sequence take precedence over the location of individual images.

As we built this tool, we realized that mapping place in the digital tool illustrates some of the same flexibility as visually representing time in photographs. Photographs often represent a moment in time, but that moment might not be intended to represent a point on a timeline like a specific day or year, and instead represent conceptual shifts in time. How could we map  “autumn” or “sunrise” on a timeline? Even if we can tell which day that sunrise was photographed, is it a misrepresentation of the artist’s agency to arrest or delineate a work in that way if the title or series does not specifically engage with temporality? Thus, for the purposes of this digital project, we have suggested a location in space for all the works where we can, but we have refrained from specifying times and drawing the liminal lines of nation-states on the map. 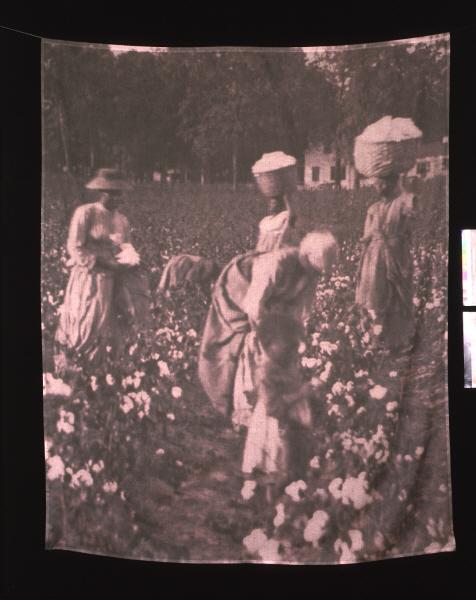 “Cotton Picking” was created in 2000 as part of Carrie Mae Weems’ “Hampton Project.” Weems reinterpreted an image taken c. 1895-1900 somewhere in Suffolk, Virginia. Where in space & time should we place the image?

With over 100 works in the exhibition and over 3,500 photographic works in WCMA’s holdings, only two images evince the natural and built environment of the Berkshires (though a dozen or so photographers in our collection have at some point called western Massachusetts “home”). Yet, the global reach of the exhibition and our collections are quite extraordinary for an institution our size. What do we make of this bounty, and this lack? This tension between experience and image, local, national, and global, seems especially prescient in this moment, when a global pandemic, and specific instances of extrajudicial racist brutality are being discussed around the world. Places like Minneapolis, Minnesota; Bristol, England; Cape Town, South Africa; Wuhan, China; and many others have become household names and a kind of geospatial shorthand for the crises and hard conversations that impinge upon the experiences of us as individuals, local communities, nations, and the whole of human civilization. The elasticity of the local event that has global ramifications is sutured to the technology and theory of photographs. Even though the world looks different now than it did when the show opened in late-January 2020, “Landmarks” continues to offer rich and provocative digital and historical perspectives and questions for our joint inquiry.

With thanks to Oliver Ruhl, Digital Humanities Graduate Intern for Fall 2019, for participating in the creation of this concept and help in determining locations and coordinates for many of these works.