Throughout a most unusual academic year, our Agents for Creative Action student collective was busy creating original content that engages the museum’s collections, exhibitions, spaces, and community.

During the Fall 2020 semester, the students created a playlist connecting some of their favorite songs with works of art from WCMA’s collection. Below find their observations; click on the name of the work of art to learn more about each piece and on the name of the song to be directed to the song on Spotify. Find the complete playlist on Spotify here.

In the spring of 2021, the group worked on interviewing museum staff, collection artists, and community members. They also organized a campus scavenger hunt, Eye Spy, connecting students with sites of past and present works of public art on campus, alongside a virtual hunt that took participants on a journey through the museum’s collection. The students wrapped up the year by creating a new coloring book based on objects from the WCMA collection; the book was printed in the summer of 2021.

Free copies are available at the Welcome Desk in the museum lobby. Download a pdf to print at home here. 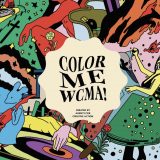 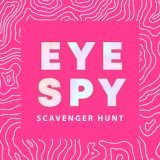 May 20, 12-3 PM EST Start on the WCMA Patio | Rain date: May 21, 12-3 PM
Members of the Williams College on-campus community are invited to meander through past and present sites of public art on campus during this afternoon scavenger hunt organized by the Agents for Creative Action. Start the course between 12-2:30 PM on the Williams College Museum of Art patio for your first clue and go from stop to stop picking up prizes, snacks, and surprises along the way. All participants will be entered to win a grand prize: an art-inspired prize pack with goods from the WCMA shop. On the patio, there will be a photobooth, food and beverages, and live musical performances by student groups. WCMA’s patio is located in front of the museum’s main entrance, between the museum and Fayerweather dorm. The musical lineup is as follows (performances run approximately 30 minutes):
12:00 | Purple Rain Adjacent
Sam Thorpe, Isaac Van Aelstyn, Geoff Salmon, Alex Quizon, and Camille Nance
12:35 | Peel Accident
Thomas Mcgee, Gigi Gamez, Ana Sofia, Hal Olson, Joel Nicholas, Sam Thorpe, Max Thierry, and Adithya K. Vaidhyan
1:10 | The Springstreeters
2:00 | The Williams Octet
2:35 | Peel Accident
Eye Spy Virtual Scavenger Hunt
May 20-21 | All are invited to participate in our virtual hunt and explore the WCMA collection to win a prize. Clues go live at this link 12 PM EST.
Search through the Williams College Museum of Art’s collections following a set of clues created by the museum’s Agents for Creative Action student group. The clues & instructions go live at this link at 12 PM EST on Thursday, May 20th. The first three people to correctly answer the five clues will win an art-inspired prize pack with “Art Everyday” Poketo hats and much more!

Work of art from WCMA collection: A Tall Flower with Pink Blossoms, made by Mughal

Song: “Somewhere Only We Know” by Keane

Both these pieces — the song and the Mughal print — are works which I have returned to throughout my college career. The song references the natural world, and the pursuit of something “relied on.” I find the study of flowers and still-life compositions something I rely on as a student of art history. Always beautiful, their execution across time and culture always reveals newfound insights. In the case of the flower in WCMA’s collection, the work evidences the delicacy of brushstroke and the extreme skill of artists within the Mughal atelier. Moreover, the choice to abstract petal shape and deviate from formal scientific exactitude proves the Mughal’s ability to co-opt European styles and use them for a specifically Indian artistic intention. It’s a simple, small work, but it reveals so much! Both the song and the artwork reveal that “simple things” merit investigation and celebration. 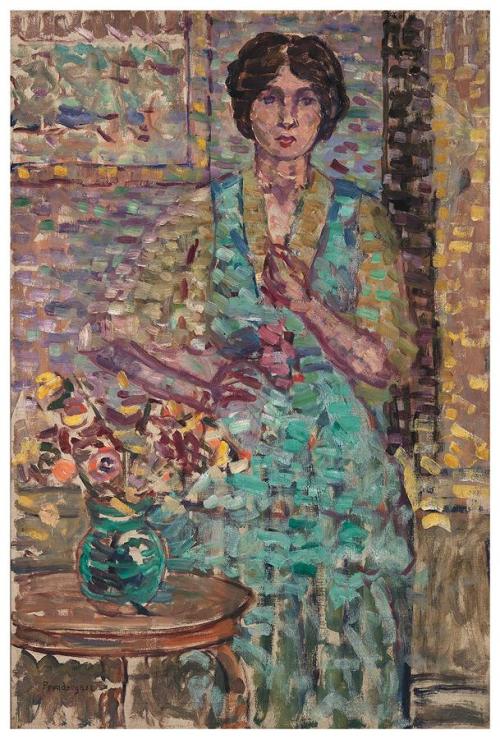 Song: “I Bloom Blaum” by Coldplay

I was listening to my playlist and “I Bloom Blaum” started to play; it’s a very calming song. I played it on repeat until I found an artwork that also made me feel calm. Woman in Green Dress is a pointillism painting of a woman gazing into the distance. The colors are muted, which contributes to the calming, yet sad, undertones. 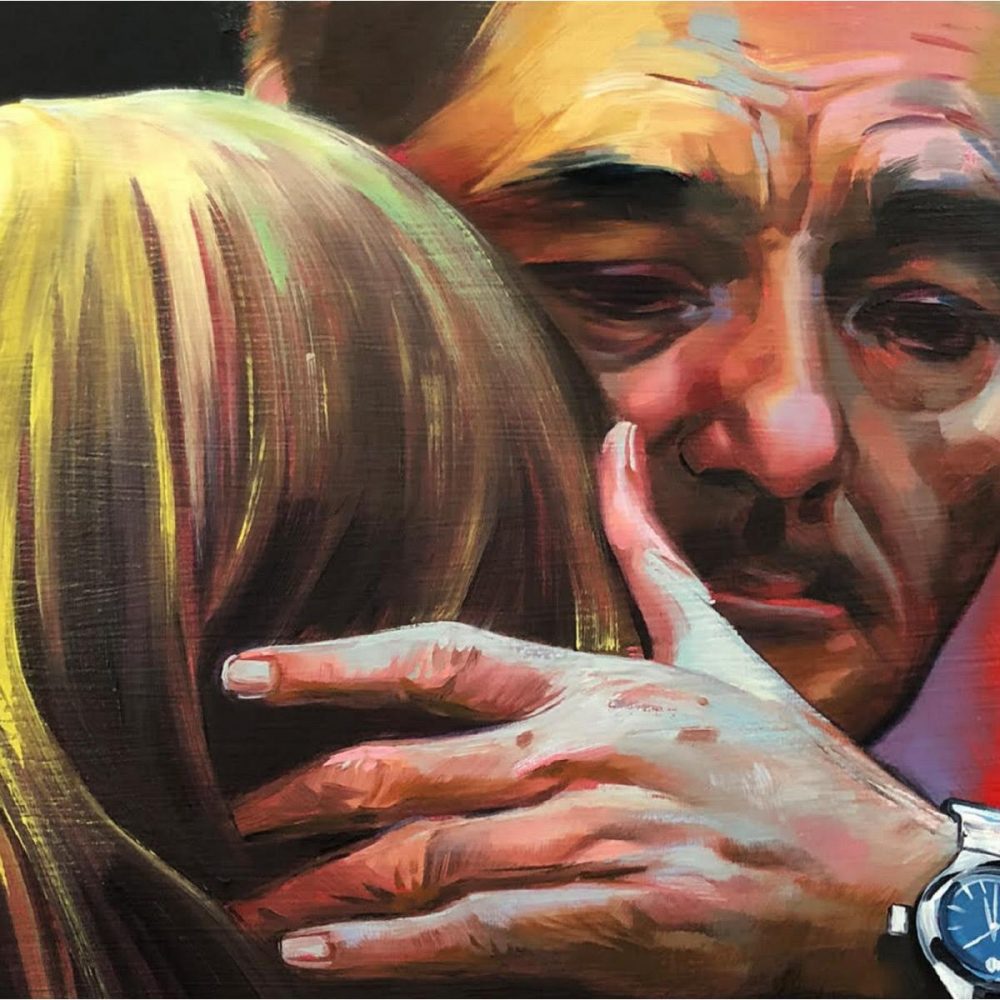 When I saw this painting, I thought that it felt incredibly pensive. The man’s expression and his careful hold of the woman almost suggests this is a farewell of some sort. The close-up shot implies that viewers are intruding on this intimate scene. I thought that this song was fitting because, like the painting, both are characterized by a sense of melancholy. 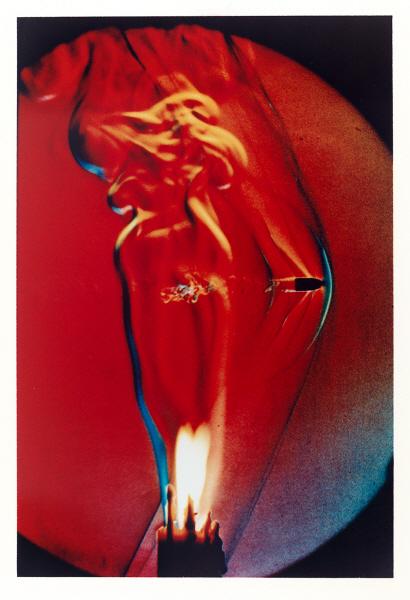 Both this photograph and this song are fiery, violent, delicate, bold, sublime, sinewy, and sensuous. They also each resist structure in interesting ways; “four ethers” is a total surprise of a song, subverting expectations of instrumentation and voice, just as the image, too, confuses our sense of scale and physical order. To me, “Bullet” and “four ethers” appear fully-formed, contextless, forcefully asserting their presence and answering only to their own laws of nature. 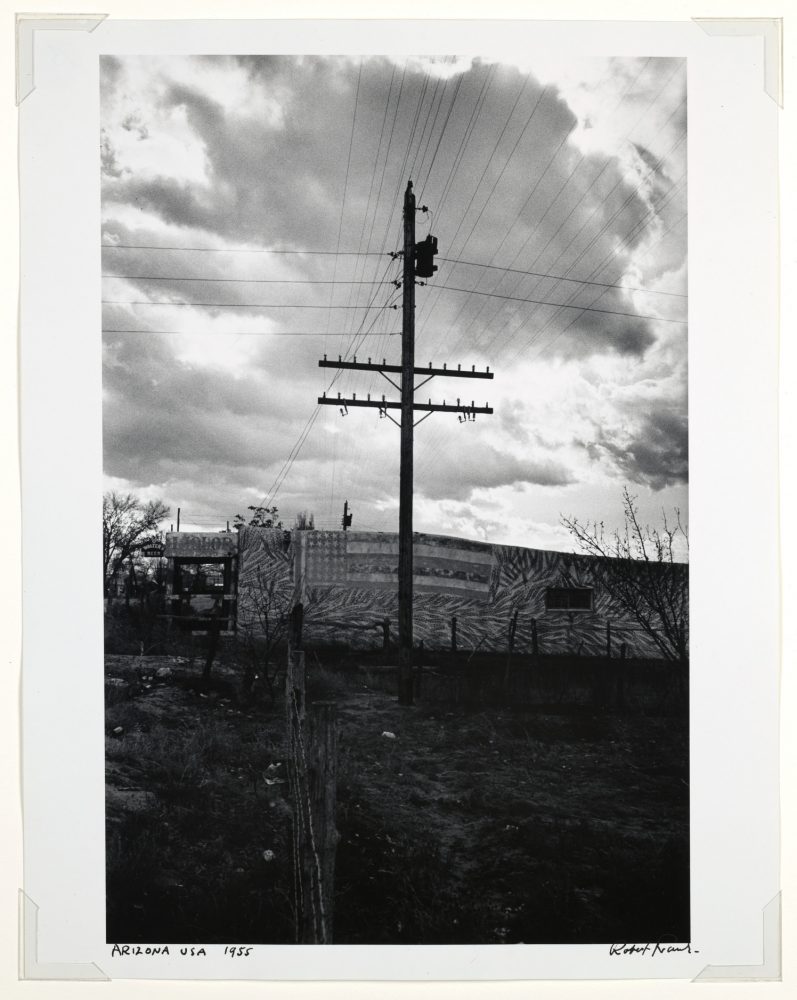 Song: “Was” by Vincent Gallo

I picked this photograph because I’m from Arizona and I thought it was really, really creepy. The power lines, broken-down liquor store, and desert brush make this photo feel like it’s something you’re not supposed to be seeing, a secret or forgotten place. The weathered texture / black-and-white gives the impression that this photo is a fragment from someplace like a nuclear wasteland, someplace that has been abandoned and overgrown. The song fits nicely because it also has a spine-tingling quality, like a blurry figure emerging from the fog, or creeping around a cemetery for the first time. 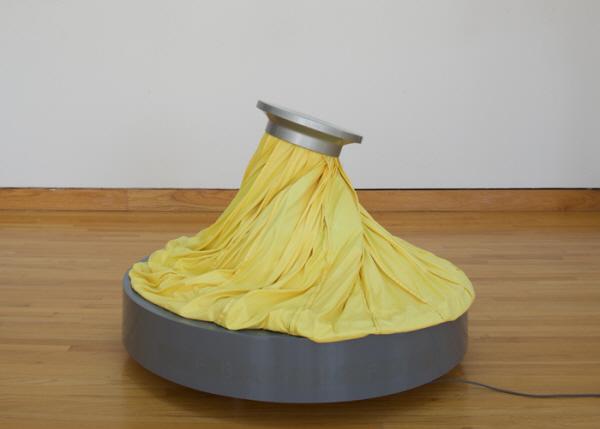 I’ve been drawn to the work of Claes Oldenberg for many years now. Whenever I run into one of his pieces, I’m always filled with delight!  His sculptures embody many of my daily requirements:  humor, color, scale, lushiness, and hidden meanings. In a daydream, I see myself (with headphones on and “Alley Cat” on repeat) walking around this giant ice bag, climbing up to the top, prying open the cap and falling right into the cavity. Inside there would be a trampoline and blankets and pillows. 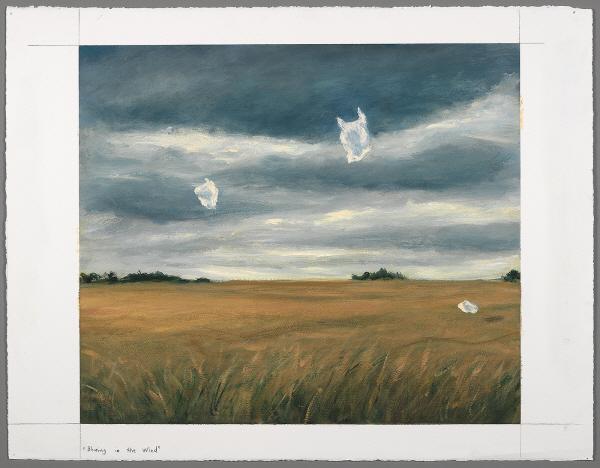 Work of art from WCMA collection: Blowing in the Wind by Adam Straus

Song: “いきのこりぼくら (We the Survivors)” by Ichiko Aoba

Something about this piece felt so akin to the emptiness of the song, which I’ve been bopping to for like two weeks straight at this point. I just recently thought to look up the lyrics and the title apparently means “We the Survivors” and the lyrics themselves are entirely about living alongside death and surviving some sort of apocalypse?? On that level I guess the painting and the song don’t really match up, but the light ambience of both the art and the music made me instantly connect them. 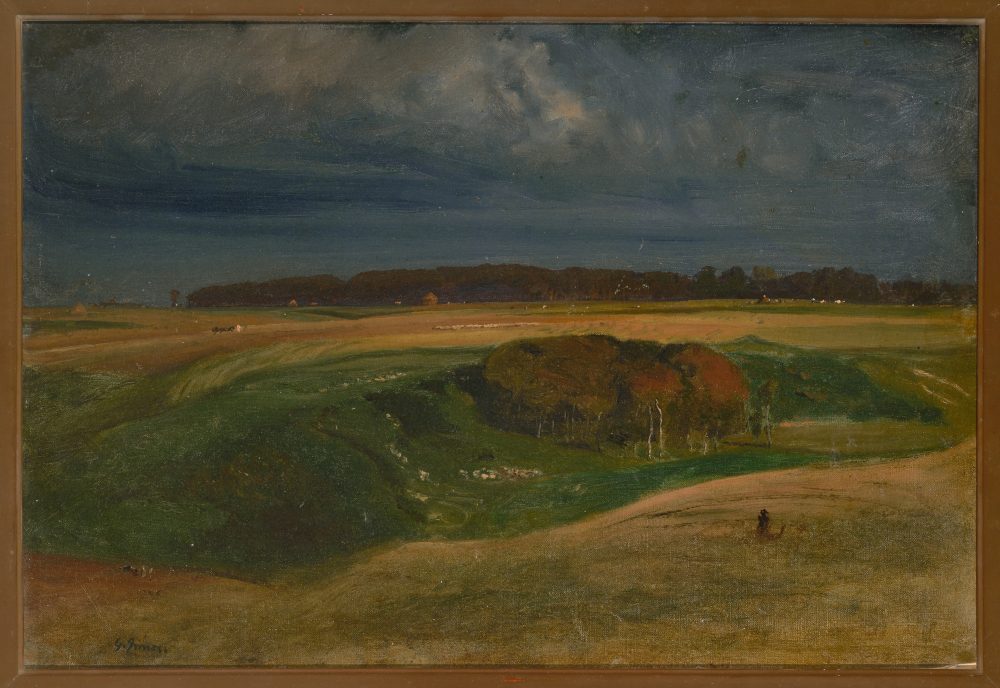 The tonalist painter George Inness is one of my favorite artists and I adore his landscapes at the Clark, and especially the painting in WCMA’s collection “Spirit of the Night.” Browsing through the WCMA collection, I discovered we had this painting by Inness as well, which feels much more unfinished and rustic than others of his paintings I have seen. I was interested in the small black dot in the lower right quadrant of the painting, which looks like it could be a solitary figure traversing this field toward the grove of trees as the center. This lone figure seemingly approaching the trees in the landscape, and the title, Sacred Grove, made me think of one of my favorite songs by the contemporary cellist Takenobu (Nick Takenobu Ogawa) titled “Shady Grove.” It is a song of love and longing, which Takenobu adapted from a traditional Appalachian folk song by the same name which is believed to have originated in eastern Kentucky around the beginning of the 20th century, close in time to when George Inness made this painting. 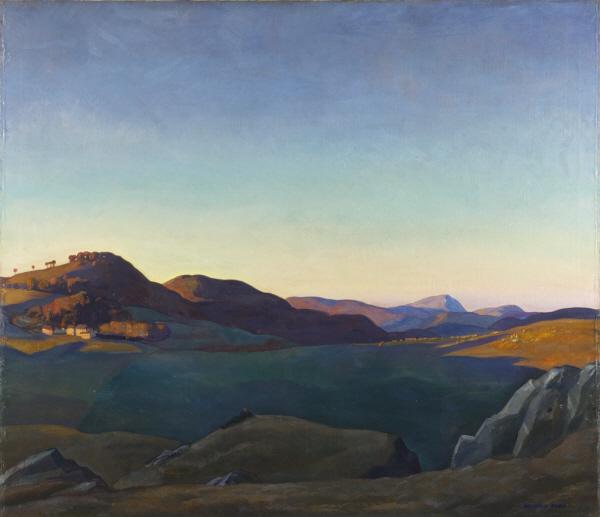 Song: “Atlantic” by Sleeping at Last

I chose this painting because it reminded me of the view from my mountain day hike on Pine Cobble. I picked this song to accompany it because although it’s an instrumental song written to represent an ocean, I feel it’s sound and the journey of the song also replicates the ebbing and flowing of the mountains in the painting. The song is also very calming, like the painting, which appears to be during sunrise or sunset. 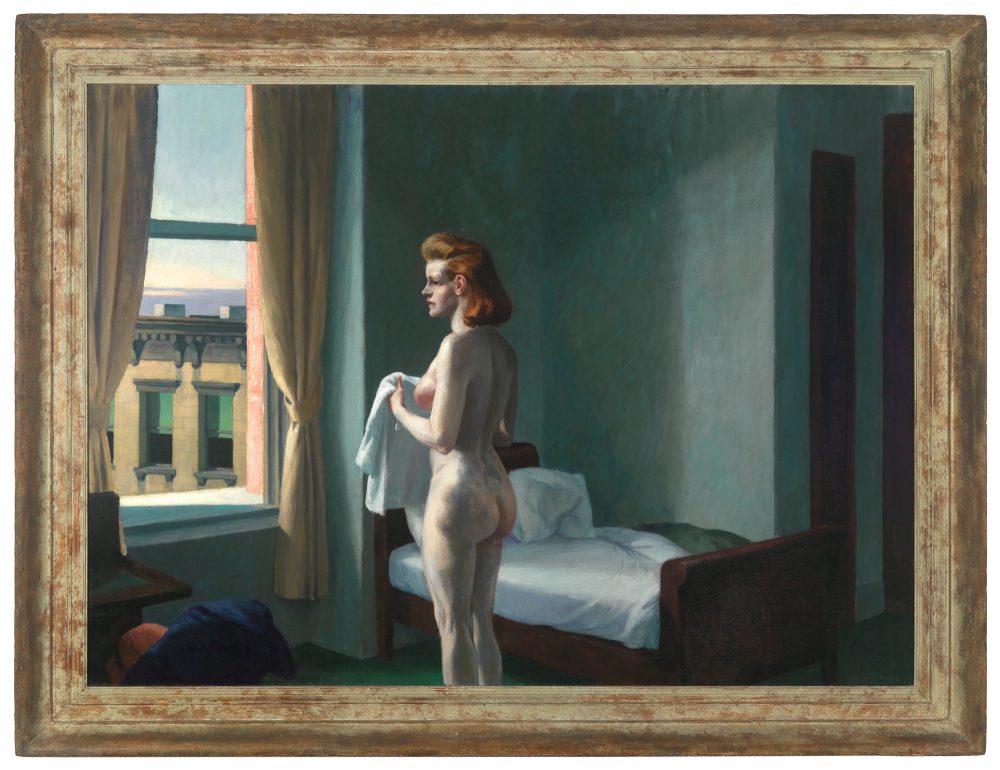 Work of art from WCMA collection: Morning in a City by Edward Hopper

Song: “What Am I Here For” by Jade Bird

I’ve been thinking a lot about Edward Hopper this year. His images of a lonely, quiet New York City felt particularly poignant during quarantine, and the echoey, raw quality of Jade Bird’s music emphasizes the isolation in this work. Looking out a window, alone in a room, feeling as though we are in a gray environment internally or externally, is a very #2020 experience. 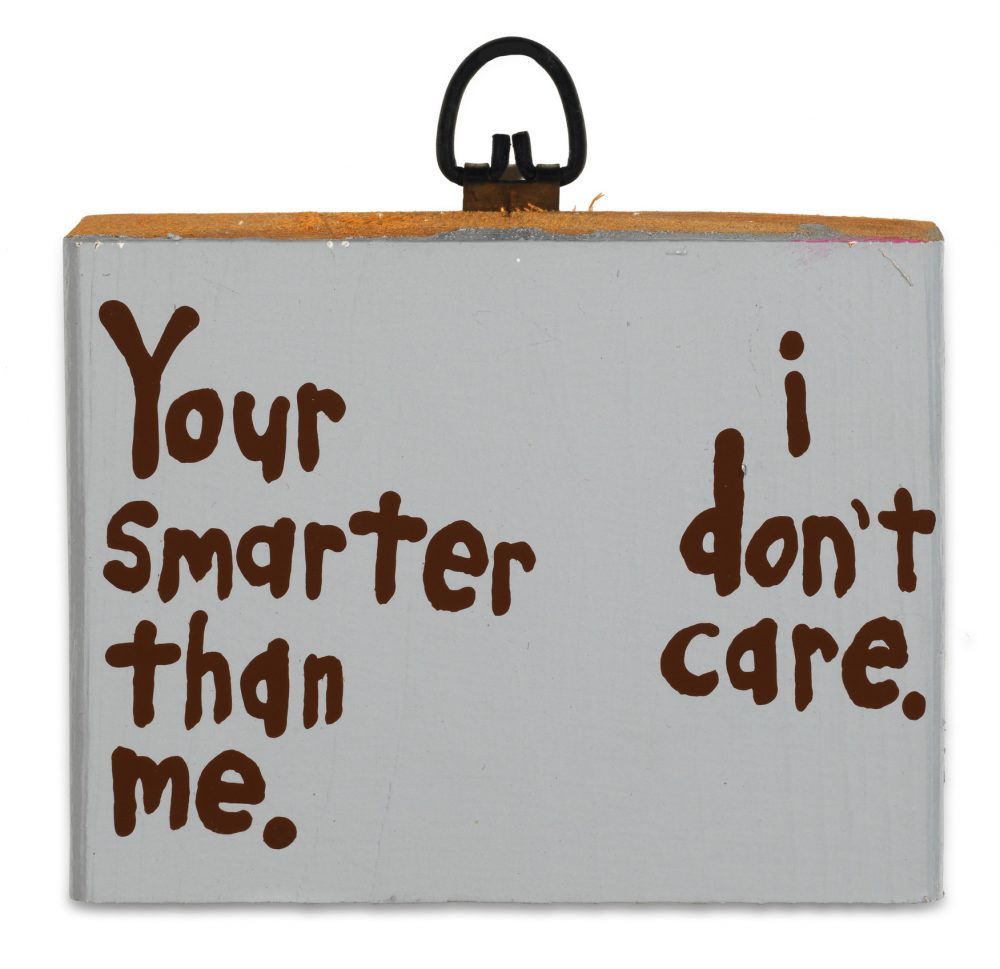 Work of art from WCMA collection: Your smarter than me. I don’t care… by Cary Leibowitz

I chose this piece because this piece has a certain angst. I love how it is very direct, just like this song! It’s a play on words, and I like how this work intentionally mispells the word “your.” It feels like a big middle finger to what is considered respectable, which I think also applies to this song. It says a big “I dont care!” to someone using you for their own pleasures. It stands proud in solitude, being unbothered, and accepting that others might be manipulating us, which is on them. You should never be ashamed of being just who you are. Not as smart, lonely, gullible — anything, really. It’s a-screaming-at-the-top-of-your-lungs song for when you feel like you “dont care.”

Search through the Williams College Museum of Art's collections following a set of clues created by the museum's Agents for Creative Action student group!