‘In the Eye of the Spiral’ Screening

In conjunction with the exhibition "Frantz Zéphirin: Selected Works," Images Cinema and the Williams College Museum of Art present a screening of the documentary "In the Eye of the Spiral." 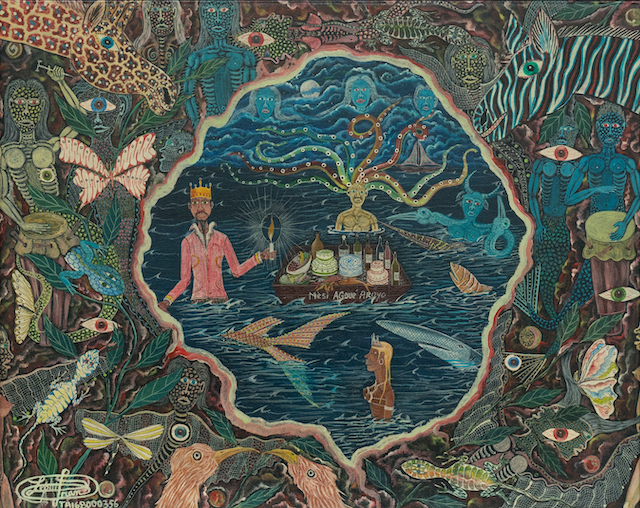 In the Eye of the Spiral (2014) details the artistic and philosophical movement born in Haiti known as Spiralism, which spans artistic disciplines, and touches upon spirituality as well as politics. Featuring narration by Annie Lennox and the music of Brian Eno, the film sheds light on the state of a country hit by corruption and natural disaster, and the incredible will of Haitian artists who produce art as a personal form of redemption and survival, Frantz Zéphirin among them.

The free screening will be introduced by Jordan Horton, WCMA Mellon Curatorial Fellow. A Q&A with the film’s director, Raynald Leconte, will immediately follow the screening.

The screening is open to the public and admission is free until max capacity, with tickets courtesy of Williams College Museum of Art. Frantz Zéphirin: Selected Works is on view through December 4, 2022.

Haitian-born Raynald Leconte is a film director and producer. He currently resides in New York City and through his UN background has lived in Africa, Europe and South America. He earned a bachelor’s degree in electrical engineering from Boston University. He was trained as an actor at Lee Strasberg in New York City and participated in several Off-Off-Broadway productions. A serial entrepreneur, Raynald has over twenty years of experience in media and technology. His corporate work for top media companies like CBS, among others was the springboard for his successful launch of three new media start-ups: Krysp Imaging Solutions, where he launched pop artist, Peter Max into the digital age, Screeny Media and Syndicated Radio Shows, where he produced “Live from San Francisco: It’s Barbara Rodgers” which aired on Clear Channel Green 960 radio, the fourth largest radio market in the US. Raynald’s first major film “In the Eye of the Spiral,” was winner of the BAFF “Best Documentary Feature” in New York City in November 2014, narrated by Annie Lennox music with Brian Eno. His 2018 film “Real Maravilloso” is a tour de force, engaging the world with Cuba’s Marvelous Realism literary movement through the legacy of Alejo Carpentier into Cuba’s current realism. “Real Maravilloso” has won multiple film festival’s Best Feature Documentary award. Raynald’s vision is to continue to create a series of documentary films in emerging markets by showcasing the extent to which aesthetics and history have no borders.