Drowned in a Glass of Water: An Installation by Pepón Osorio

In 2009, the Williams College Museum of Art commissioned artist Pepón Osorio (b. Santurce, Puerto Rico, 1955) to create a work of art, using the themes of food, community, and culture as a starting point. Osorio, whose artistic practice involves a process of social engagement, spent the previous year sharing conversations, stories, and meals with many people in both Williamstown and North Adams. The resulting artwork represents the stories of two families, transforming personal memory into a collective narrative.

This major installation includes an 18-foot revolving platform divided by a central wall, filled with objects and video elements. As the platform slowly revolves, the artist’s interpretation of two lives is revealed to the viewer. One side presents a home’s interior, featuring a life-sized mannequin wearing an elaborate dress crocheted by individuals from the region and the artist’s home city of Philadelphia. The other side presents an exterior view from a home in the Berkshires. The work explores the dynamics involved in nourishing an individual, a family, and a community. The title comes from a common expression that conveys how sometimes in life we face challenges that seem so large we feel like we are “drowning in a glass of water.”

Osorio’s installation has grown from the dialogues and time he has spent with two families but ultimately reflects the story of the artist as well. Rather than visually depicting food or using food as a medium, the artist chose to elaborate on the theme of nourishment in the context of our lives and to examine how we handle life’s challenges. Osorio’s newly commissioned artwork considers the intersection of food, community, history, class, and culture in the daily lives of the people of Western Massachusetts. 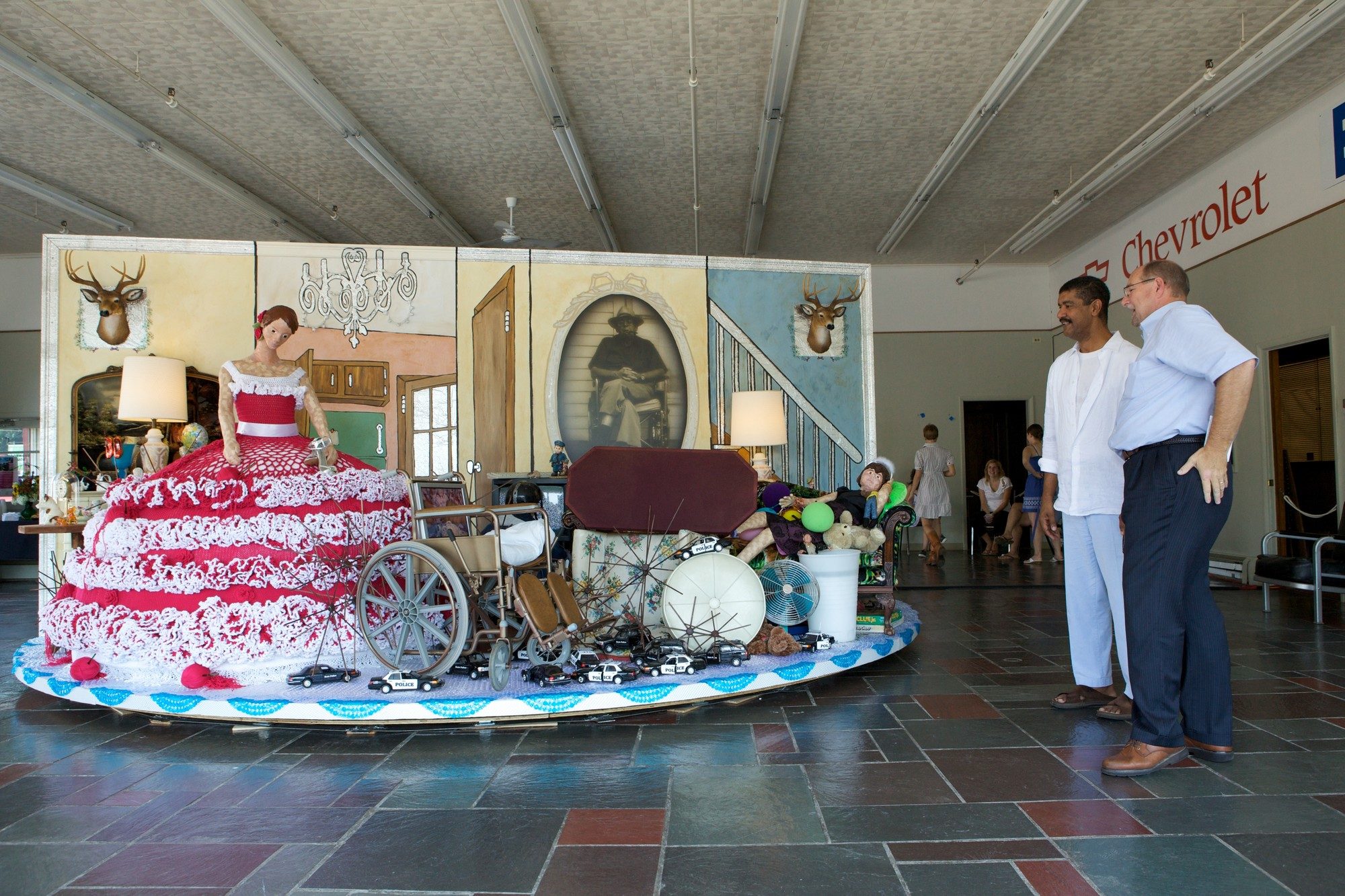 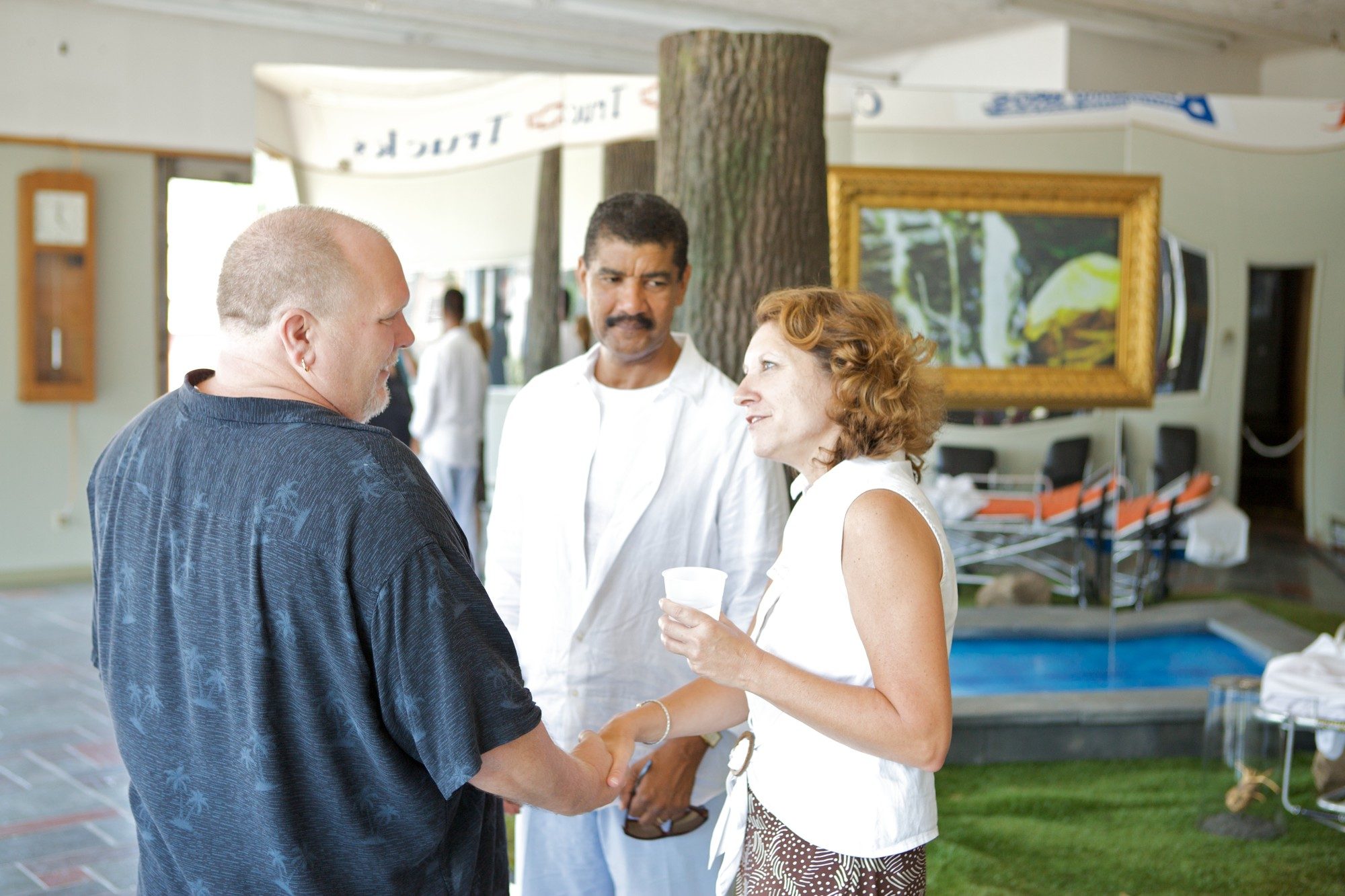 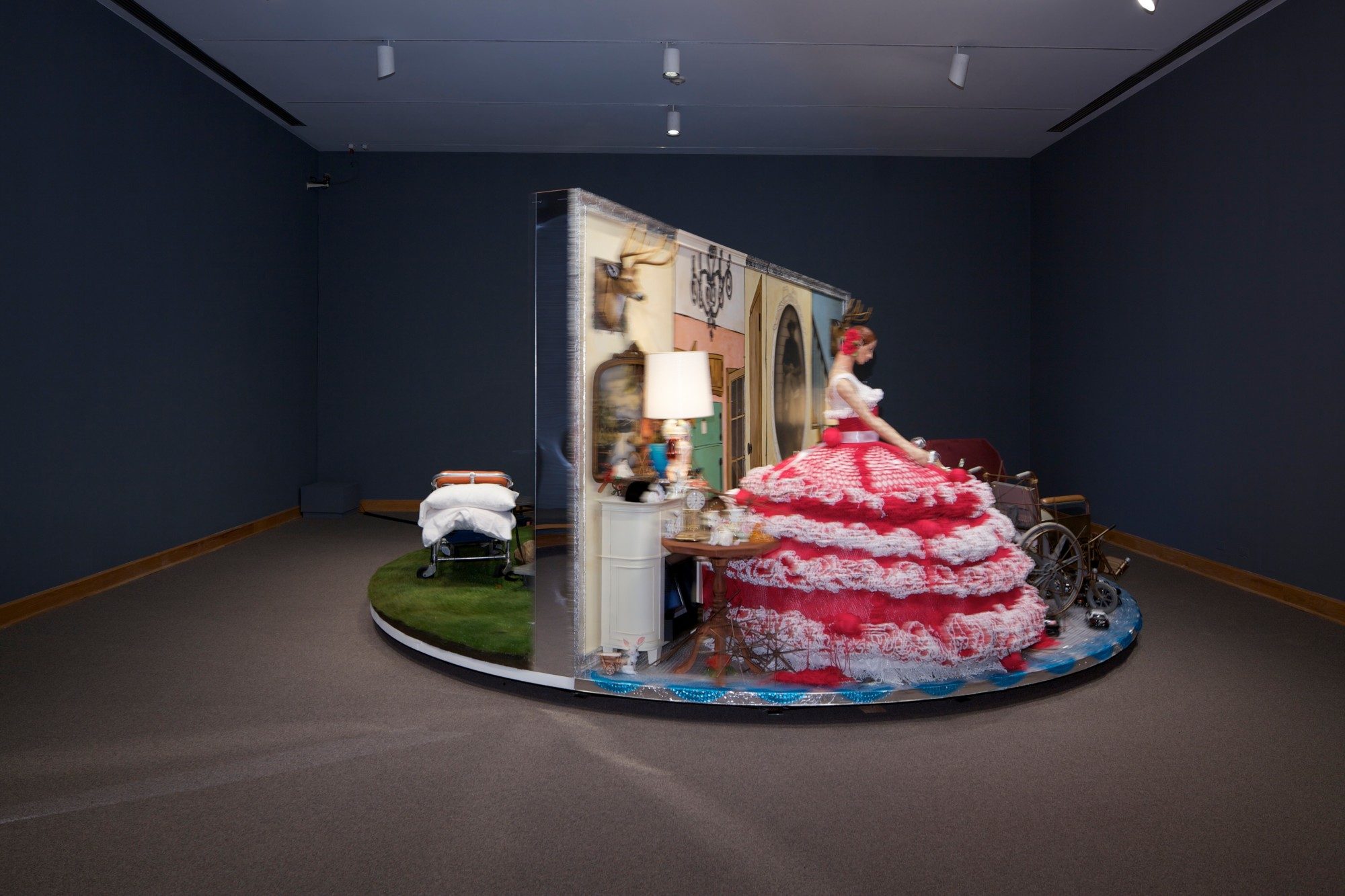 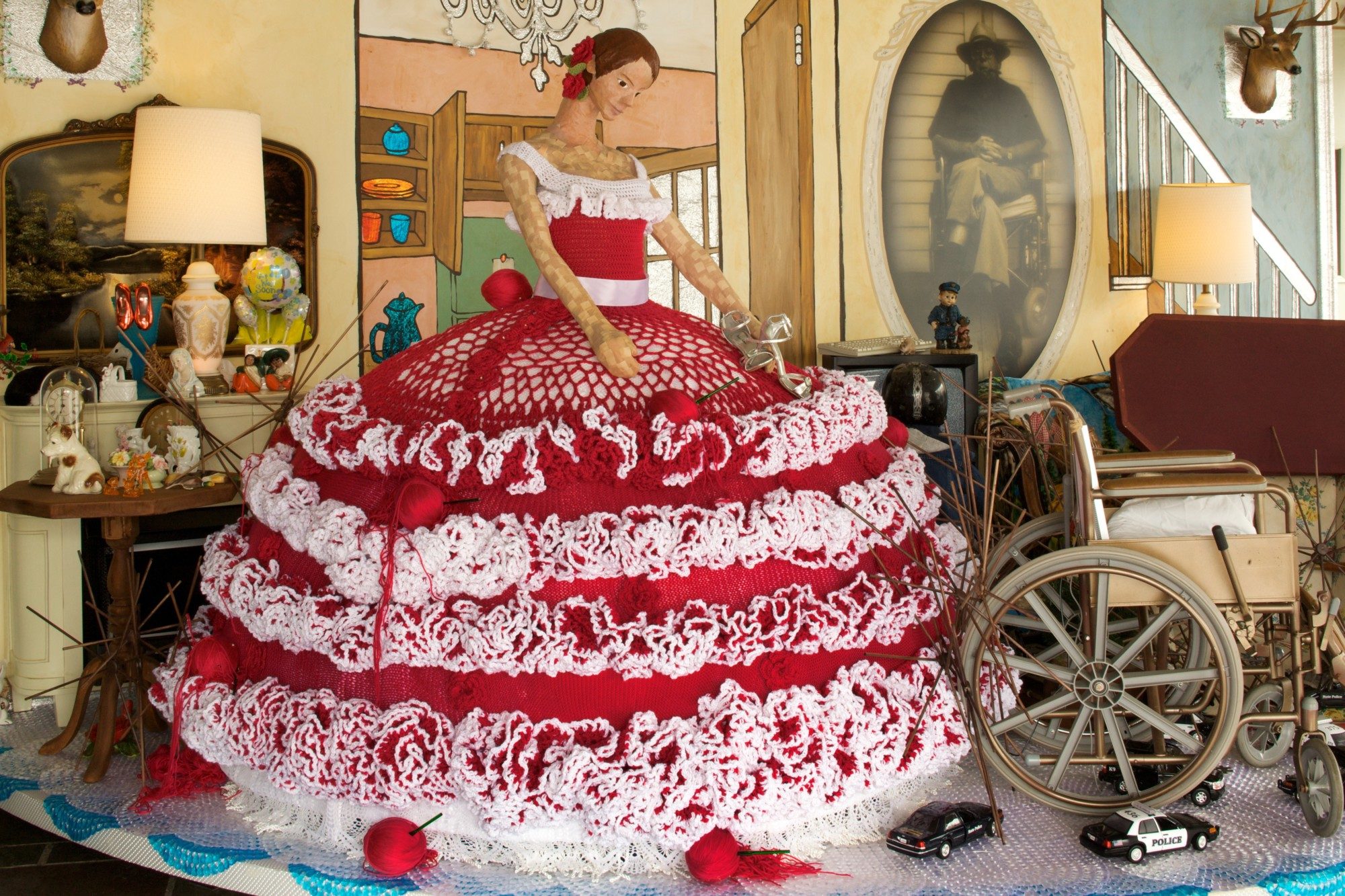 Story of the Project

In celebration of the 10th anniversary of Gastronomica, the journal of food and culture, WCMA collaborated with Darra Goldstein, a Williams professor and Editor-in-Chief of Gastronomica, to organize a major symposium exploring food, culture, and community and to commission artist Pepón Osorio to create a work of art with these themes as a starting point. Goldstein and Corrin identified Osorio because of the unique, community-based way in which the artist works to generate his art.

Rooted in his early experiences in social work in the Bronx, Osorio’s unique way of working involves extended dialogues with various community members that, in turn, inspire his visual art. Osorio began by visiting a number of local farms, meeting with museum and college staff, and then working with students and community organizations to understand the fabric of our region—the economics of our towns, the relationship of our communities to each other. Osorio conducted numerous talks and workshops at Williams, including a winter study course, Art in the Community, which introduced students to his methodology and issues related to conducting community-based collaborations.

As part of the course this winter, Osorio began working closely with the Northern Berkshire Community Coalition (NBCC). The mission of the Coalition is to improve the quality of life for people in the Northern Berkshires by providing a public place for the community, building stronger neighborhoods, and promoting positive youth development. Through Osorio’s talks with members of the NBCC, the artist identified the first family with whom he began to collaborate. He then met with numerous residents of Williamstown to find another family partner. Extensive conversations, meals, and connections with the families form the basis of the inspiration for the artwork.

Born in 1955 in Santurce, Puerto Rico, Pepón Osorio is one of the most significant artists working in the United States today. Best known for his large-scale installations, Osorio merges conceptual art and community dynamics. Osorio’s work emphasizes the exhibition space as an intermediary between the social architecture of communities and the mainstream art world. He has worked with well over 25 communities across the U.S. and internationally, creating installations based on real life experiences. For almost two decades Pepón Osorio has been presenting work in unconventional places prior to exhibiting in a museum setting, thus exploring the subjectivity of meaning in art and the multiple meanings that these installations achieve depending on their location.

In Badge of Honor, 1995, first presented at a Newark storefront, Osorio reveals the relationship between a jailed father and his son through the recreation of the spaces they inhabit. The artist’s use of mass-produced objects coupled with his socio-anthropological savvy presents the spectator with the opportunity to engage in multiple readings of his work. Ultimately, they speak not only to the Latino community but to society in general.

Since 1990, Pepón Osorio has participated in international venues such as the 1993 Biennial Exhibition of the Whitney Museum of American Art, InSite, San Diego/Tijuana, 1994, and the Second Johannesberg and the Sixth Havana Biennials, both in 1997. His numerous solo exhibitions include the Museo Nacional Centro de Arts Reina Sofía in Madrid, Spain, 1999, the Escuela de Artes Plásticas, Puerto Rico, 2000, and the Institute of Contemporary Art, Philadelphia, PA, 2004; as well as group exhibitions including NeoHooDoo: Art for a Forgotten Faith, The Menil Collection, Houston, TX, which traveled to P.S.1 Contemporary Arts Center, Long Island City, NY, 2009, and Voces y Visiones, El Museo del Barrio, New York, 2010. Osorio’s works are in public collections such as The Menil Collection, P.S.1, The Walker Center for American Art, The Wadsworth Atheneum, The Whitney Museum of American Art, Museo de Arte de Puerto Rico, and The National Museum of American Art, among others.

Osorio was awarded the CalArts/Alpert Award in the Arts: Visual Arts and the prestigious John D. and Catherine T. MacArthur Fellowship in 1999, Skowhegan Medal for Sculpture, 2001, The Smithsonian Legacy Award for the Visual Arts, 2008, and the Fleisher Art Memorial Founder’s Award, 2009. Since 2006 he has been a Professor of Art at the Tyler School of Art, Department of Art and Art Education, Temple University, Philadelphia, PA. He is represented by Ronald Feldman Fine Arts in New York.

PDF
Press Release
↪ Link
How the other half lives