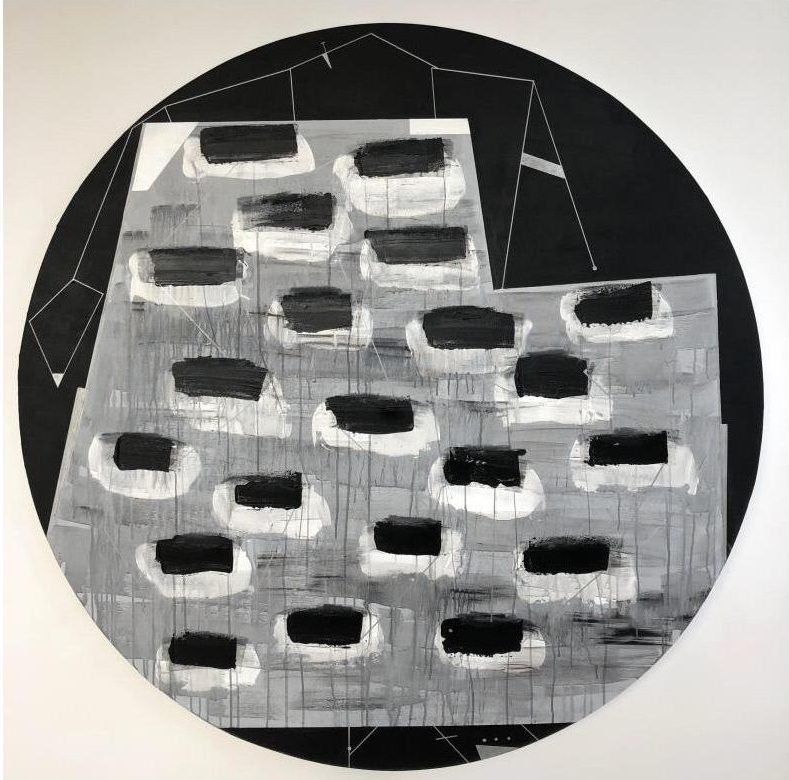 “For black people, moving through a given environment comes with questions of belonging and a self-determination of visibility and semi-autonomy. This means for the systemically disenfranchised, compositional movement—ways in which the body unifies, balances, and arranges itself to move through space—is a skill used in the service of self-emancipation within hostile geographies.”—Torkwase Dyson

In The Middle Of The Ocean was created by Dyson as part of her solo exhibition I Can Drink the Distance at Cooper Union in Spring 2019. The exhibition centered on ideas of contemporary colonization, displacement, and how the body travels through built environments under those conditions. Dyson specifically considers the element of water in this series and how it functions as a vital currency of life as well as a geographic medium that has facilitated the movement of black bodies through history.

Torkwase Dyson is an abstract artist who currently works in Beacon, New York. She attended Tougaloo College, where she earned degrees in sociology and social work. She then received a BFA at Virginia Commonwealth University and an MFA at Yale University. She received the Joan Mitchell Foundation’s Painters & Sculptors Grant in 2016 and completed a residency at Yaddo in Saratoga Springs, New York, in 2014. In 2019 she won the Studio Museum in Harlem’s Joyce Alexander Wein Prize. Her work has been exhibited at the Studio Museum in Harlem, the Whitney Museum of American Art, the Arthur Ross Architecture Gallery at Columbia University, the Cooper Union, the Suzanne Lemberg Usdan Gallery at Bennington College, the Colby College Museum, The Drawing Center, the Corcoran College of Art and Design, the Schuylkill Center for Environmental Education, and the Smithsonian National Museum of African Art. The Smithsonian National Museum of African American History and Culture recently acquired another painting from the Water Table series, entitled I Can’t Breathe (Water Table).