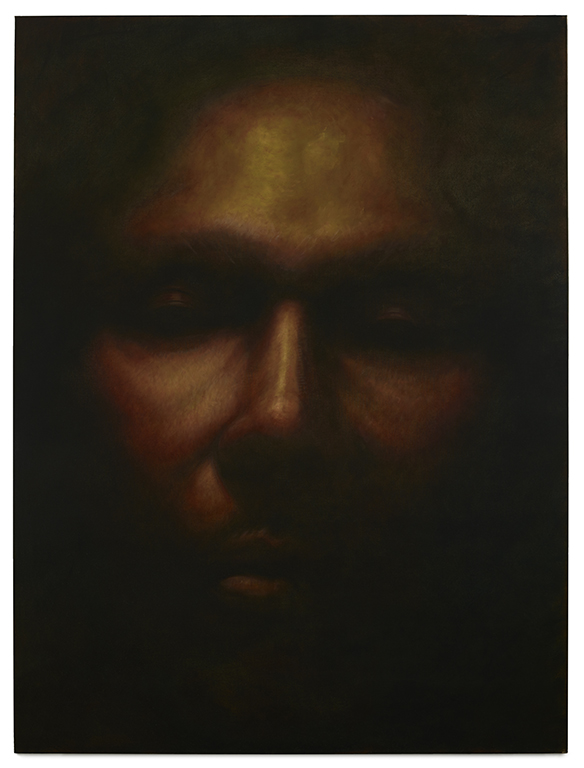 Jerome is a monumental oil on canvas depicting a man’s face in extreme close-up. The subject’s features, touched by a soft golden glow, emerge out of total darkness. While the quality of light and delicate brushwork recalls the work of Caravaggio and Rembrandt, Kaphar based this painting on a mugshot he discovered in a search for his estranged birth father’s prison records. The original source material limits what is represented on the canvas in the way that a mugshot reveals little about an individual.

Searching his father’s first and last name Kaphar turned up 97 mugshots for men who shared the exact same name. Jerome eventually led to The Jerome Project, a group of devotional sized images on gilded panels of these men, all created from their mugshots. The project underscores Kaphar’s personal narrative as well as the larger social reality of mass incarceration in the United States.

Titus Kaphar (b. 1976) completed his MFA at Yale in 2006 and has emerged as one of the most important artists of his generation. Kaphar’s creative practice interrogates the history of art, in particular the lack of people of color in the Western canon. He currently resides in New Haven, Connecticut, where as a community-oriented arts leader, he has crafted a collaborative space for students and artists. Kaphar was awarded an artist-in-residency at the Studio Museum in Harlem in 2006 and was the first recipient of the Gwendolyn Knight and Jacob Lawrence Fellowship from the Seattle Art Museum in 2009. The Robert Rauschenberg Foundation’s Artist as Activist fellowship in 2016 allowed Kaphar to produce a documentary film about The Jerome Project. He was granted a MacArthur Foundation “Genius Grant” Fellowship in 2018.