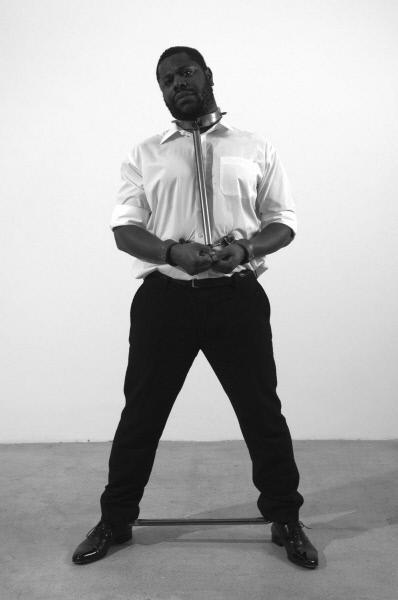 Steve McQueen modeled this black-and-white self-portrait after a 1920s image of a Dutch escapologist. Like the contortionists, illusionists, and magicians who entertain with their remarkable feats of elusion and absconding, the artist too works a kind of magic with props and a camera. The image of McQueen’s black body, at first glance confident and defiant, is restrained in colonial-era shackles, evoking anonymous slave photography. The title also imagines the remarkable skill that many slaves acquired as a means of survival, a refusal to be held captive. The work becomes a call to recognize enslaved people’s valor and resilience rather than complacency or lack of agency.

Steve McQueen is a filmmaker, screenwriter, and video artist, best known for his heavy-hitting feature films Hunger (2008), Shame (2011), and the Oscar-winning 12 Years a Slave (2013) as well as his conceptual video art practice. He is a Turner Prize recipient (1999), represented Britain in the 53rd Venice Biennale (2009), and has had solo shows at the Tate in London (2020), Marian Goodman Gallery in Paris (2016), Schaulager in Münchenstein, Switzerland (2013), the Art Institute of Chicago (2012), and the Fondazione Prada in Milan 2005. Born and raised in London, McQueen is of Trinidadian and Grenadian descent. He studied at Chelsea College of Arts, Goldsmiths College, and New York University’s Tisch School of the Arts.