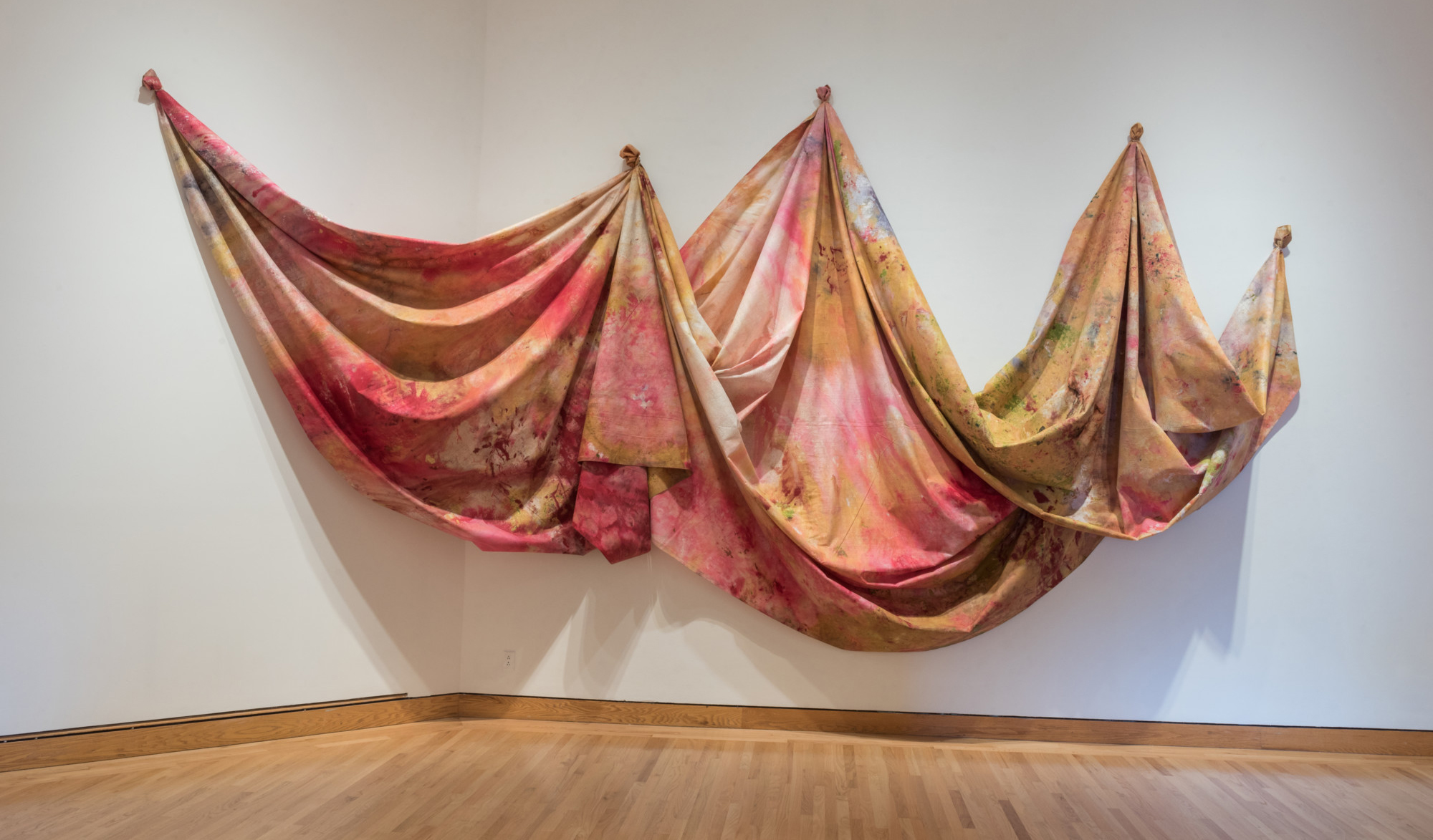 Situation VI – Pisces 4 is a signature work by an artist who helped shape the discourse around painting during the late 1960s and 1970s. Gilliam’s Drapes, including Situation VI – Pisces 4, proved that post-painterly abstraction was, in his hands, still evolving by blurring the boundaries between painting, sculpture, and performance.

To create the all-over abstraction, Gilliam poured acrylic paint mixed with a surfactant onto polypropylene fabric. He then bended, folded, or bunched the fabric as he worked, thereby producing a densely colored painting that resists understanding of the process of its creation. Indexical marks referring to Gilliam’s initial pouring are effaced or transformed by his manipulation of the support. The pools, streaks, and smears seem to have emerged from some kind of alchemy.

With the Drapes, Gilliam also overturned the notion of painting as a mostly flat object hanging on a vertical surface. Instead, Drapes are hung suspended from the wall folded or bunched, sometimes spilling onto the floor. Many of Gilliam’s Drapes, including Situation VI – Pisces 4, do not have one set way in which they are to be installed. Instead each time one is displayed, the final shape is the result of a performative act by the artist or a curator, with an almost infinite variety of configurations possible.

Sam Gilliam was born in 1933 in Tupelo, Mississippi. He holds a BA and an MFA, both from the University of Louisville in Kentucky. Renowned for his abstract artworks, Gilliam is among the foremost American painters working today. Gilliam and his Washington Color School cohorts (Morris Louis, Kenneth Noland, Alma Thomas, Howard Mehring and Thomas Downing), experimented with various brushless and free-pour painting techniques. These artists eschewed absolute technical and authorial control in favor of the creative potentialities of improvisation and chance.

While being a black man, a black father, and a black artist in America are important identities for Gilliam, he famously rejects the notion that race should serve as the lens through which the aesthetic and critical reception of his work is judged. He, and artists like David Hammons and the late Barkley L. Hendricks, have bemoaned the fact that American artists of African descent are still expected to explain the impact of their race and ethnicity on their work. Gilliam’s love of modern architecture, film adaptations of ocean adventure narratives, and the southern Appalachian landscape, as well as his memories of traveling in Europe and Asia during his stint in the U.S. Army, and hearing jazz in now-lost clubs in Washington, D.C., inform the material audacity of his artistic process.