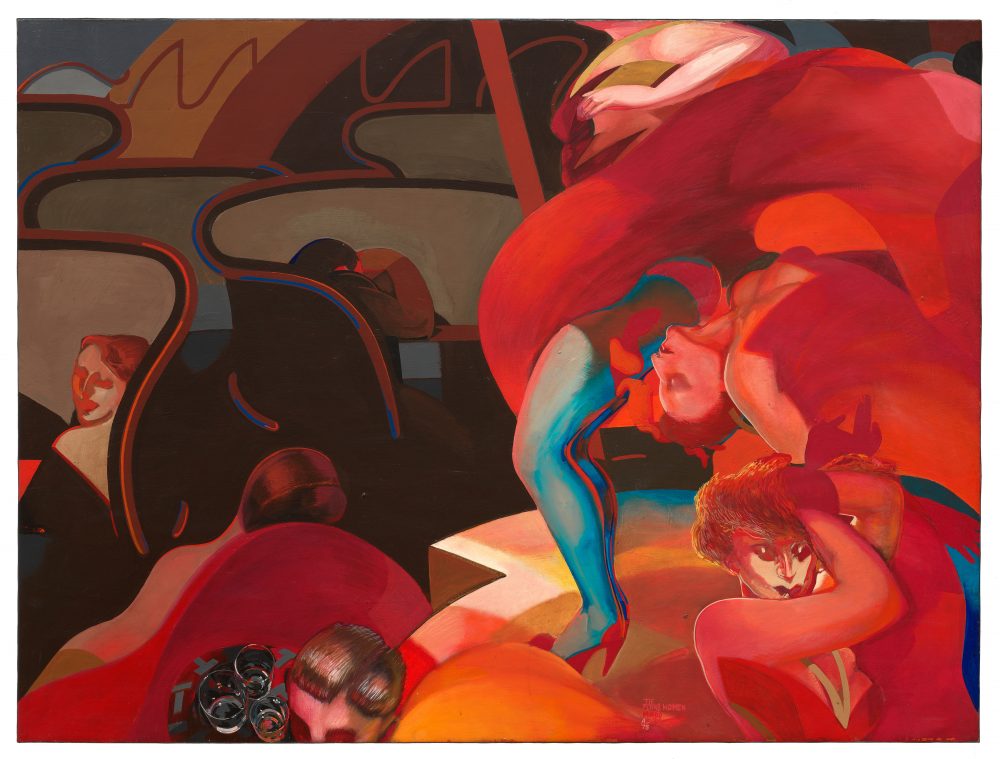 The Flying Women joined Meza’s drawing, Portrait Study, and a photograph of the artist, The Wonder of Mundo Meza, by Steven Arnold, both 1983, already in the museum’s collection. The overall effect of the painting is that of a dynamic, highly stylized composition that evokes the smooth arabesques and geometric forms of Art Nouveau and the theatrical lighting, costuming and outlandish color combinations of Toulouse-Lautrec’s renditions of burlesque Paris nightlife. In 1975, at the time of the painting’s making, Meza was just 20 years old, not yet of age to legally go to nightclubs himself. That same year, he joined Aisha Ali Dance Company, where he learned and performed Middle Eastern dances. This experience was likely among the inspirations for his fanciful composition, drawn, like much of his work, from his extraordinary imagination.

Mundo (Edmundo) Meza (1955-1985) was born in Tijuana, Mexico, and lived and worked in East Los Angeles. He attended Otis Art Institute in 1973. In order to fund his artistic practice, Meza collaborated on experimental window displays starting in 1980. While he performed with numerous collaborators, he participated in relatively few exhibitions during his short career, most notably, Group Show at Los Angeles Contemporary Exhibitions (LACE) in 1978 and Fashion Mannequin at Security Pacific National Bank in Los Angeles in 1981. Two decades later, Meza’s work was included in Asco: Elite of the Obscure: A Retrospective, 1972-1987, organized by the Los Angeles County Museum of Art and Williams College Museum of Art in 2011 and 2012, and featured in Axis Mundo: Queer Networks in Chicano L.A, organized by ONE National Gay & Lesbian Archives at the USC Libraries in collaboration with the Museum of Contemporary Art, Los Angeles, and organized as a traveling exhibition by Independent Curators International (ICI).