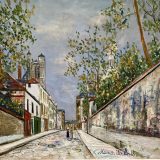 La Rue Clovis is representative of Utrillo’s mature style, when he became interested in the depiction of color alongside his focus on the geography and architecture of Paris. His work is often grounded in specific places in the city: La Rue Clovis is in the 5th Arrondissement, on the left bank of the Seine, which includes the Sorbonne as well as a number of other famed French educational institutions. Utrillo has depicted two of the street’s major landmarks, the Lycée Henri IV, on the left, and the church Saint-Étienne-du-Mont, on the right. The street is enclosed on both sides by unadorned, unpainted masonry, which Utrillo transforms into a complex skein of reflected color dappling the walls and cobblestones. Utrillo’s approach to color has resonance with that of Maurice Prendergast, who also painted a world resplendent in hues perhaps unnoticed by the casual observer.

Maurice Utrillo was the son of artist and model Suzanne Valadon, and he grew up in the artistic milieu of the Montmartre district of Paris, where Valadon had posed for Renoir, Picasso, Puvis de Chavannes, and others. He began painting at the age of 19 at the recommendation of a therapist, who thought that it might be helpful in curbing his alcoholism. Utrillo gained attention for his street scenes, first of Montmartre, as in WCMA’s Le Lapin Agile, ca. 1916 (83.13.4), and then for other sites. He sometimes painted from postcards, as he suffered from agoraphobia and found it difficult to go out. Utrillo became a Catholic mystic in 1933 and moved away from Paris. He died in the spa town of Dax, on the southwest coast of France.