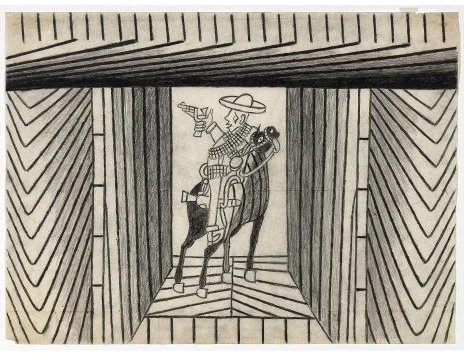 Martín Ramírez was a cross-border artist who produced his drawings in transnational and carceral contexts. While institutionalized in a California psychiatric hospital, he began making drawings reflecting his Mexican heritage, particularly of the mounted caballero, as well as his experiences working on railroads and in mines as a migrant in the United States. Completely self-taught, he created his drawings with any materials he could find, including cigarette rolling papers, fruit juice, and burned matches. Untitled (Black and White Caballero No. 7) combines the motif of the armed horseman with abstract patterns of line, which establish the illusion of perspectival space but also constrain the figure.

Born in Jalisco, Mexico, Martín Ramírez grew up in a ranchero culture where horse and pistol were important symbols of masculinity. In 1925, he left his wife and children to seek work in California, doing manual labor for a variety of industries. The stress of his working conditions and racist attitudes toward migrant labor likely led to the deterioration of Ramírez’s mental health. He was detained by police in 1931, diagnosed as a schizophrenic, and spent the remainder of his life institutionalized in central California. His drawings were first exhibited during his lifetime, in exhibitions of art by people with psychiatric disorders, but he began occupying the place he holds today as one of the most imaginative self-taught American artists after a retrospective exhibition at the American Folk Art Museum in 2007.