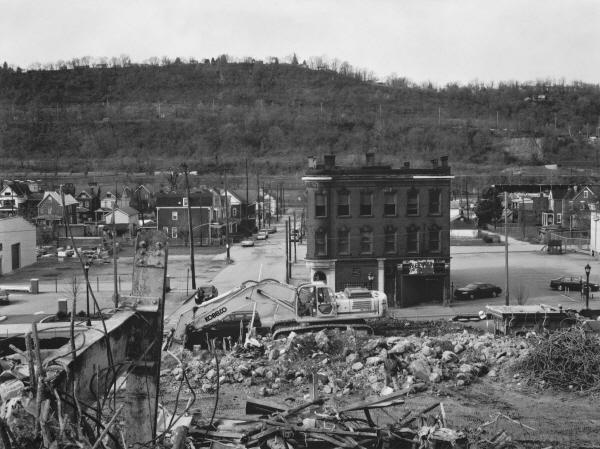 Fifth Street Tavern and UPMC Braddock Hospital on Braddock Avenue is from the series The Gray Area (2010-12), a poignant sequence of aerial landscape images LaToya Ruby Frazier shot over several days from a helicopter. These bird’s-eye views Frazier terms “communal views.” As they present a perspective on the scene that no human eye could see without aid, they are, to Frazier’s mind, the most democratic and the least politically-charged. This oddly-intimate vantage is enhanced by the deep depth of field and wide aperture setting that allow the light to delineate three key visual bands in the photographic landscape. The series was initiated after Frazier learned of the imminent destruction and razing of the iconic UPC Braddock Hospital in her hometown of Braddock, Pennsylvania. After the closing of the steel mill in the late 1990s, the hospital was the largest employer in the community and contained the only restaurant in town. Frazier was particularly compelled to document the razing of the hospital and restaurant after learning they would be rebuilt six miles away in a wealthier suburb of Pittsburgh.

LaToya Ruby Frazier received a BFA in Applied Media Arts from Edinboro University of Pennsylvania (2004) and a MFA in Photography from Syracuse University (2007). She was a fellow at the Whitney Museum’s Independent Study Program (2010–2011) and was selected as the Guna S. Mundheim Fellow for Visual Arts at the American Academy in Berlin (2013–2014). In 2014, Frazier joined the faculty of the School of the Art Institute of Chicago, where she serves as Associate Professor of Photography. Frazier’s practice moves between photography, film, and performance in order to construct “visual archives” of human experience. Her recent work engages the themes of rustbelt desolation and revitalization, environmental in/justice, healthcare inequality, postmodern industrialism, and communal histories.