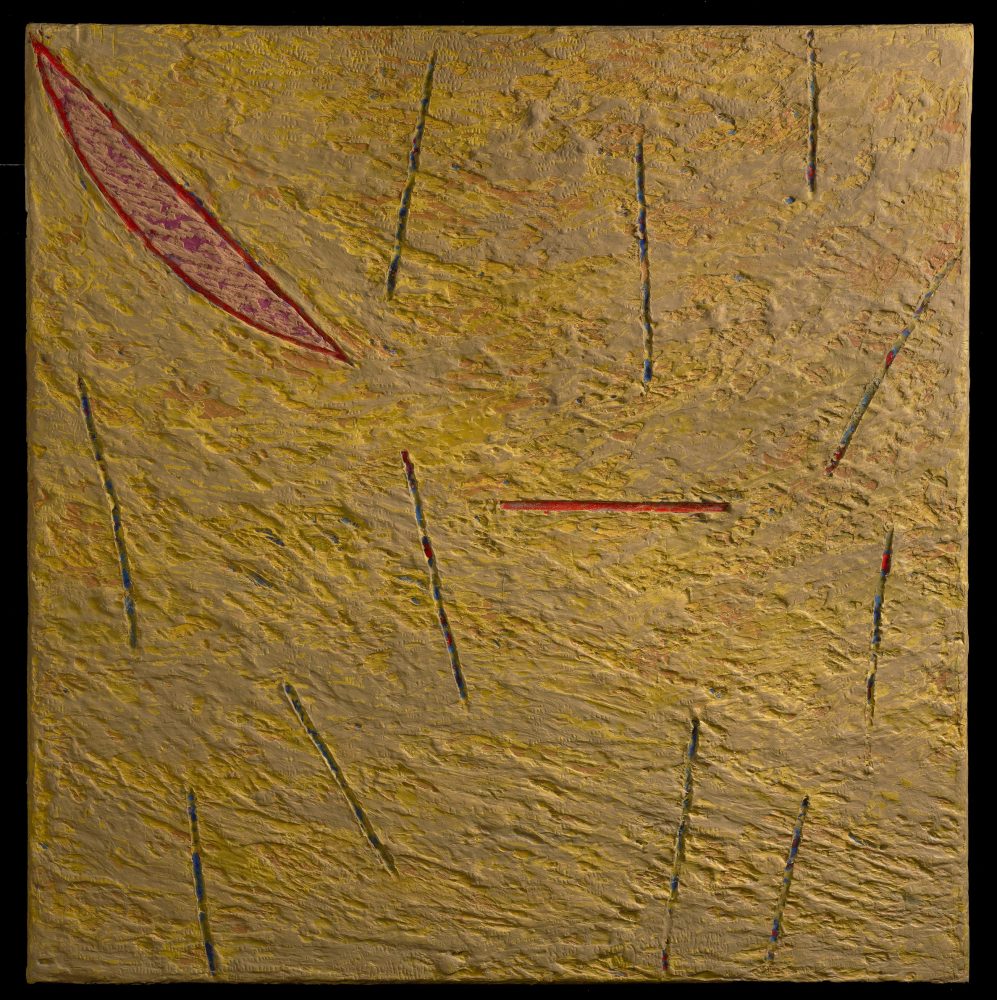 Sun Dance is an early work by Kay WalkingStick. She had completely abandoned the brush and worked the canvas with a knife, a razor blade, and her bare hands. Manipulating as many as eight to ten layers of acrylic and cold wax with her hands, WalkingStick achieved real physical presence and connection with the canvas. Although WalkingStick objects to offering interpretations of what her abstract work symbolizes, the title Sun Dance piques the viewer’s interest in the yellow color of the uneven surface, which varies from bright yellow to light brown to orange-yellow. The canvas could connote an abstracted landscape, with the serene vastness of prairie interrupted by what could be trenches, paths, or even branches. The crescent shape is a motif that continues into WalkingStick’s later works, which are explicitly figurative landscapes overlaid with traditional Native American patterns.

Kay WalkingStick (b. 1935) is a citizen of the Cherokee Nation whose career spans more than four decades and focuses especially on landscapes. Her distinctive approach to painting emerged from the New York art world, between the late modernism and postmodernism of the 1960s and 1970s. Over decades of intense and prolific artistic production, her art seeks spiritual truth through the acts of painting and metaphysical reflection. One of the most celebrated Native American artists, WalkingStick’s works have been shown in numerous one-person and group exhibitions in the United States and Europe. She is represented in major museum collections, including the Metropolitan Museum of Art, New York; the Whitney Museum of American Art, New York; Detroit Institute of Arts Museum, MI; the National Museum of American Indian, Smithsonian, Washington, DC; the Hood Museum of Art, Dartmouth College, Hanover, NH; the Israel Museum, Jerusalem, and the National Museum of Canada, Ottawa. WalkingStick was the subject of a large-scale retrospective at the National Museum of the American Indian (November 7, 2015–September 18, 2016), a touring exhibition that traveled to the Dayton Art Institute; the Kalamazoo Institute of Art; the Heard Museum; the Gilcrease Museum; and the Montclair Art Museum in 2017 and 2018.