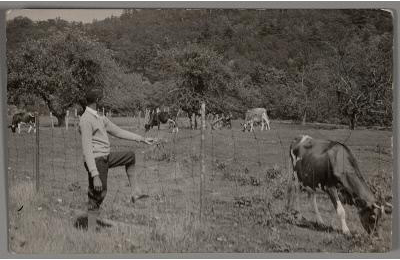 This image of James Van Der Zee’s eldest nephew with a cow joined a portfolio of 18 photographic prints by the artist acquired  in 2017. The exhibition, James Van Der Zee: Collecting History, presented at WCMA in spring 2019, featured the portfolio and provided a rich overview of the photographer’s life, career, and subjects. Hubert Butler with a Cow #1 demonstrates Van Der Zee’s interest in documenting his family and introduces specifics of the Berkshire landscape and economy, as well as genre and narrative elements not found in the Lenox images from the portfolio.

James Van Der Zee (1886-1983) was the primary chronicler of black life in New York City. Born and raised in Lenox, Massachusetts, Van Der Zee and his wife built a thriving studio portraiture practice in Harlem, New York. His manifold talents in studio portraiture, documentary photojournalism, and commercial photography garnered him the support of politicians, celebrities, and millionaires. He rose to international prominence in the early 1970s when his work started to be collected by libraries, historic archives, and museums alike. As a Berkshire County native, Van Der Zee’s extraordinary legacy of photographic experimentation is important to Williams College.