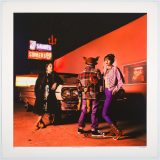 Coyote Tales, no. 1 positions Native people and traditional Native folklore as alive and well in contemporary life. Derek No-Sun Brown (Shoshone-Bannock and Bois Forte Band of Chippewa) portrays Coyote, a mythological being revered in Native creation myths for its intelligence but also acknowledged to be a somewhat impatient and cunning trickster. Brown/Coyote turns away from us, standing in front of Kaa Folwell (Santa Clara Pueblo) and Dina DeVore (Jemez and Kewa Pueblo). The scene occurs in front of Saints and Sinners tavern in downtown Española, New Mexico. Romero added red lighting in post-production to heighten the sense of visceral conflict and added stars to the night sky to evoke cosmology, the supernatural, and the always-already connectedness between everyday situations and myth. The location is meant to elucidate a crossroads and a heightened moment of in/decision.

Born in 1977 in Inglewood, California, Cara Romero was raised between the Chemehuevi Reservation (federally protected lands near Mojave, California; boundaries supersede the border between eastern California and western Arizona) and Houston, Texas. An enrolled citizen and council elder of the Chemehuevi Indian Tribe (part of the larger Southern Paiute Nation), Romero, along with her husband, ceramicist Diego Romero (Cochiti Pueblo), and their three children, currently divide their time between Santa Fe, New Mexico, and Mojave. Romero studied cultural anthropology at the University of Houston. Disillusioned with portrayals of Native Americans in the past tense, Romero decided “that making photographs [of contemporary native presence] could do more than anthropology did in words.” She studied photography and photojournalism at the Institute of American Indian Arts (IAIA) in Santa Fe and Oklahoma State University.