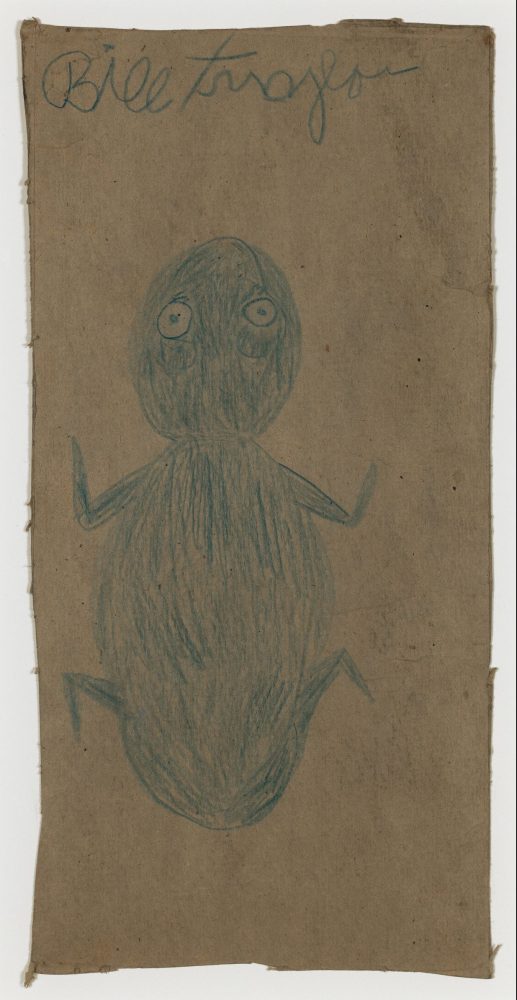 Bill Traylor was born into slavery in Lowndes County, Alabama, on the plantation of the Traylor family. While some of Traylor’s life has been reconstructed by historians, the lack of accurate information and documentation of African Americans born before the twentieth century, especially in the South, makes his life particularly hard to track. We do know that following the emancipation of slaves, Traylor continued to work the farm on the Traylor family plantation until late in his life as Jim Crow laws undermined the newfound freedom of African Americans. In 1909, the boll weevil—a bug that feeds on the cotton plant—devastated the crops throughout Alabama, causing the demise of the Traylor plantation and displacing many tenant farmers, including Traylor, throughout the next half century.

Around 1927, Bill Traylor moved to Montgomery, Alabama. The city of Montgomery was segregated but had a burgeoning African American community, and the Monroe Street Black Business District was home to stores, schools, and churches. The animals and people that frequented Monroe Street would inspire Traylor’s work. Initially residing in a boarding house, Traylor became homeless with the onset of the Depression and slept in a funeral home on Monroe Street. In the late 1930s, Traylor was employed at a shoe repair shop neighboring a sign and display shop, which first introduced Traylor to art supplies.

Traylor was 86 years old in 1939 when his first artwork was “found.” The New South Artists Coalition noticed Traylor’s street drawings of insects and animals and began giving him art supplies. World War II displaced the New South members, and their relationship with Traylor ceased around 1944. Traylor then bounced around the homes of his family members in the North, but did not adapt well to the climate there and preferred to be homeless back in Montgomery. Around this time, Traylor developed diabetes and his health worsened. He died in 1949.

Traylor began to achieve recognition in the late 1970s. Between 1982 and 1984, thirty-six of his works were included in a travelling exhibition, Black Folk Art in America 1930-1980, that started at the Corcoran Gallery of Art in Washington, D.C. In 2018–2019, the Smithsonian American Art Museum presented Between Worlds: The Art of Bill Traylor, a major retrospective of the artist’s life and works. Traylor’s work is included in the collections of the Museum of Modern Art, New York; The Metropolitan Museum of Art, New York; the Whitney Museum of American Art, New York; Smithsonian American Art Museum, Washington D.C.; The High Museum of Art, Atlanta; and the Milwaukee Art Museum.