Since the fall of 2015, Economics professor Stephen Sheppard and WCMA curator Kevin Murphy have taught the biennial course Acquiring Art: Selecting and Purchasing Art for WCMA. In the class, students visit galleries and auction houses to locate works of art that align with the museum’s collecting priorities and have a predicted monetary value greater than their asking price. Students present their works to WCMA’s staff, and the museum purchases those deemed most impactful for the collection at the best price. The course was last offered in fall 2021.

Eighty-two students have taken the course, and WCMA has purchased nine works of art. The objects proposed by students have greatly enhanced the inclusivity and diversity of WCMA’s collection. Along with these five works displayed in the McNicol Gallery in the fall of 2021, two others by Thomas Sills and Kay Walkingstick will be installed nearby after conservation work, and another work by Torkwase Dyson is installed upstairs in Remixing the Hall.

The label text is drawn from the students’ proposals to provide insight into some of their reasons for why they believed WCMA should acquire the art works.

Art acquisitions are made possible by the Fulkerson Fund for Leadership in the Arts, established by Allan W. Fulkerson ’54. 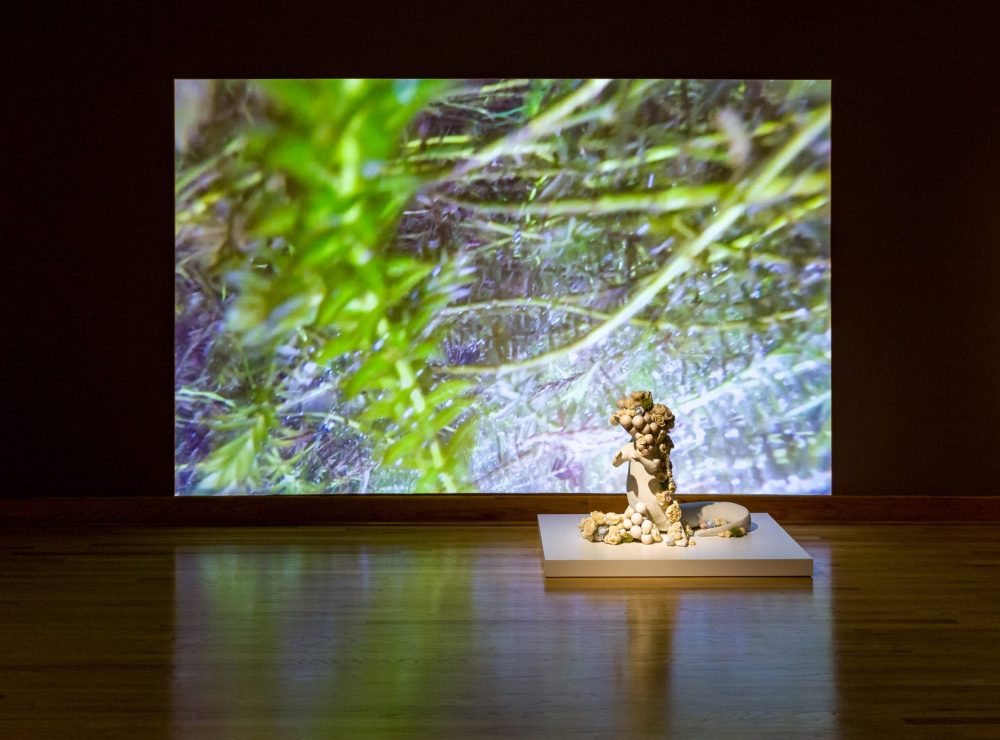 Alligator Creature and Wacissa are strong as discrete objects, and are stronger still when working together. They are not beholden to one another, but each is emboldened by the other’s presence. Wacissa is an opening into the netherworld where Alligator Creature lives. In tandem, Wacissa and Alligator Creature represent a cross-section of Hamilton’s practice; they elucidate the collaborative and intertextual relationship between objects created in different media. 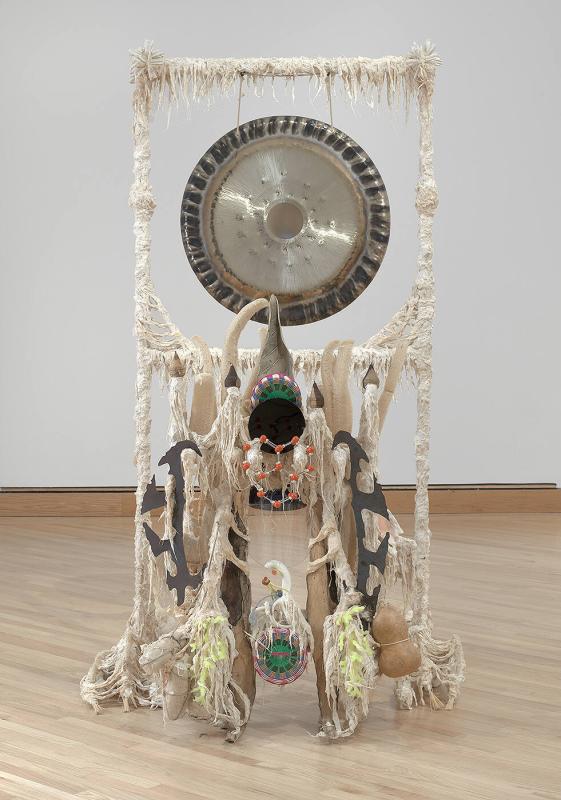 Museum purchase, Fulkerson Fund for Leadership for the Arts
M.2022.4

Maravilla’s work is an exploration of and a healing mechanism for the trauma of his childhood migration fleeing the civil war in El Salvador and his adult battle with colon cancer. Both are explored simultaneously through a combination of a wide range of materials and found objects that reflect Indigenous and pre-colonial knowledge, contemporary political commentary, and personal history. The gong in Disease Thrower #10 can be played in the artist’s sound bath performances, which seek to throw disease out of the body through its healing properties and auditory activation, healing both the viewer and the performer. 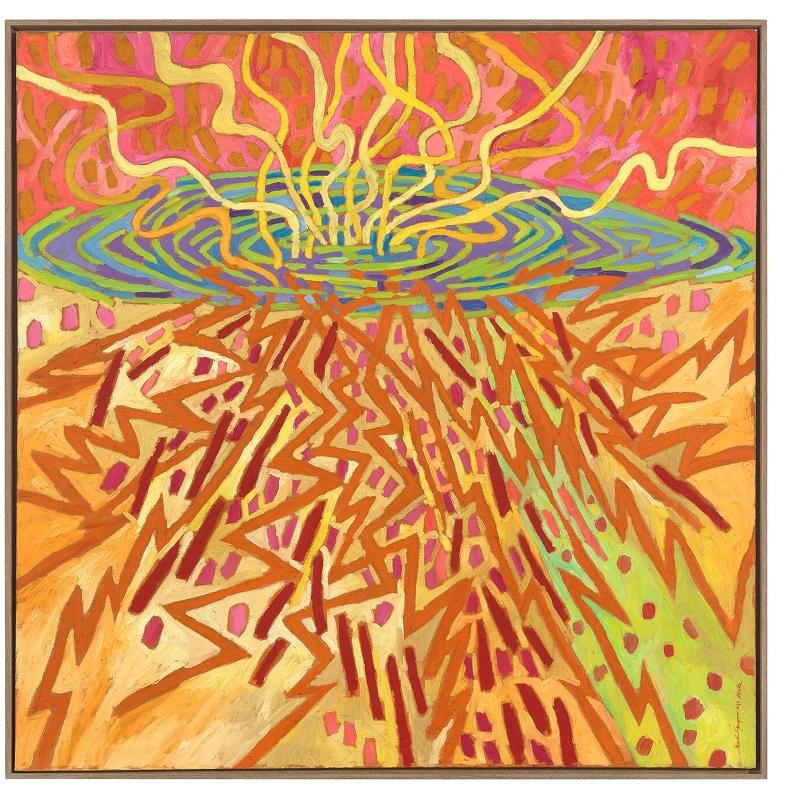 Mildred Thompson was a pioneering Black LGBTQ artist, thinker, and educator whose practice encompassed painting, printmaking, sculpture, music, and photography. Thompson said of her compositions that “there are symbolic things that have to be learned to make work universal … you can’t limit who you communicate with … But you have to know yourself. Everything I touch will be part Black and female—all my success and the things I have gotten are part of that.” 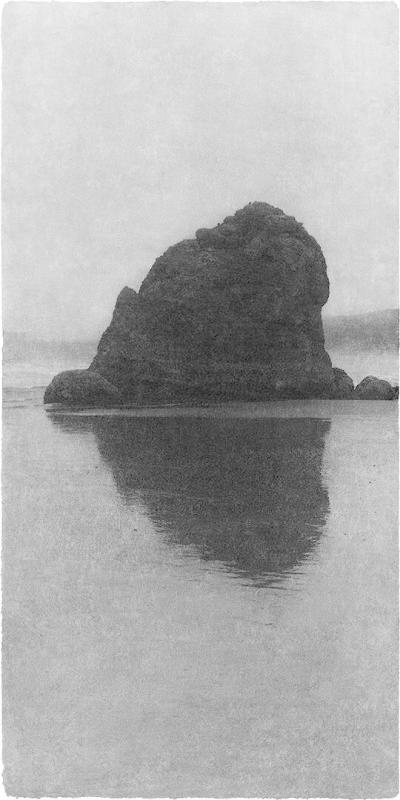 “I don’t portray landscapes or nature,” says Jungjin Lee. “The desert makes me see my inner self clearly and my aim is to make images of what I feel there—my inner state of mind, the eternal sense of being open and present. Lee also prints on distinctive Korean mulberry paper, which blurs edges, creating ambiguity for the viewer as to the image’s true media. We believe that Lee’s photograph intersects with classes in the new Asian Studies concentration, as well as courses in Environmental Sciences and the history and practice of photography. 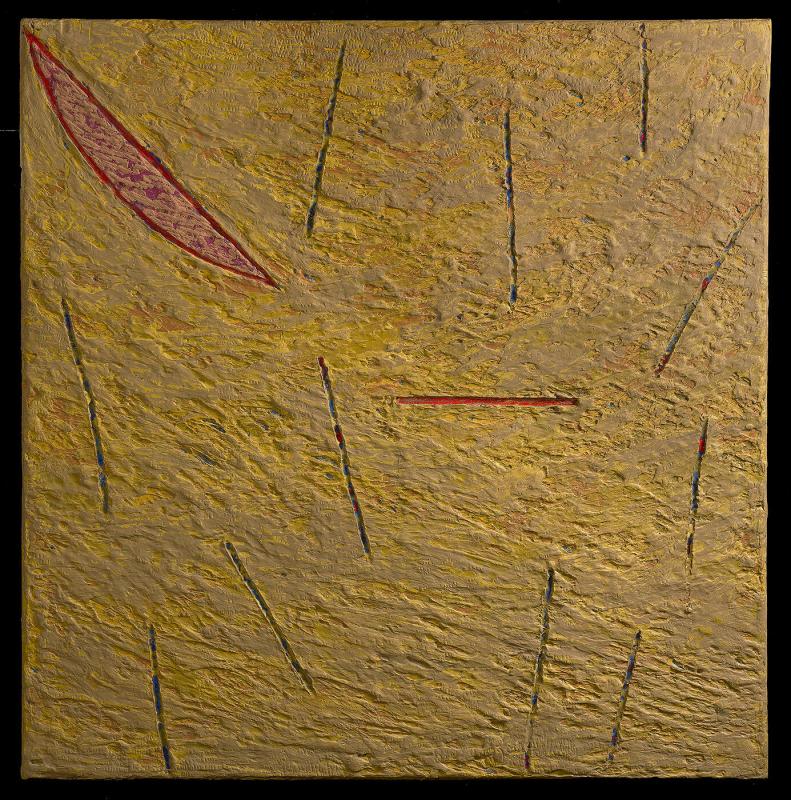 Williams is located on the traditional homelands of the Stockbridge-Munsee Band of Mohican Indians. The college community has recently sought to explore aspects of Indigenous American experience through courses and programs. We believe that WCMA needs to collect more work by Indigenous Americans, and this painting by Walkingstick, a member of the Cherokee nation, demonstrates tension between abstraction and representation, as well as traditional and contemporary artistic practices.

Summer is a work that sits right at the cusp of gestural abstraction and post-painterly art. It is representative of the 1950s shift in the practice and theory of Modern art-making. Indeed, Summer signals both backward and forward in time along the trajectory of Abstract Expressionism. As a Black artist, Sills struggled against racism by choosing to work in abstraction, which was seen as the nearly exclusive purview of white men.

Trailer was born enslaved on a plantation in  Alabama, and after Emancipation remained on the property as a sharecropper. In 1909, the boll weevil devastated crops in Alabama, forcing him and many tenant farmers off the land. Throughout the college there is a heightened level of interest in animal studies and posthumanism, motivated by the pressing issue of climate change forcing humans to interrogate our relationship with the natural world. 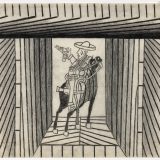 Museum purchase, Fulkerson Fund for Leadership in the Arts
M.2019.18

Martín Ramírez is considered one of the  self-taught masters of drawing in the 20th  century, a symbol of the Mexican immigrant experience, and an inspiration for Latinx artists and writers in the United States. A cross-border artist who produced his work in a transnational, marginalized and institutionalized third space, Ramírez’s work features traditional subjects from his past as well as modernist elements. 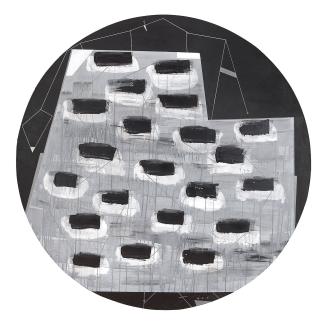 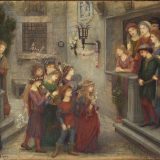 Spartali-Stillman occupied a unique place in the art world as a female artist and intellectual amidst the male dominated and misogynistic culture of the Pre-Raphaelite Brotherhood in England, and the Cornish Art Colony in New Hampshire. She was a prolific artist who created some of the most imaginative work of the late Pre-Raphaelites. 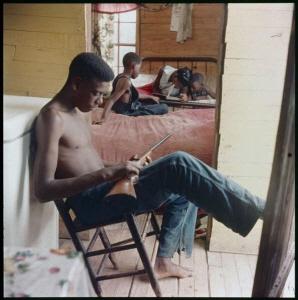 This photograph embodies what the Gordon Parks Foundation calls his “ability to honor intimate moments of daily life despite the undeniable weight of segregation and oppression.” Parks’s images of Alabama caused a stir throughout the United States after Life Magazine published them as A Segregation Story. The print is one of only three made by Parks himself, after the negative was thought to have been lost.

Museum purchase, Fulkerson Fund for Leadership in the Arts
M.2015.20

Keene Valley, Adirondacks is a depiction of an epic American landscape. Painted at the end of Reconstruction, it can be read as a meditation on the difficulties of national healing after the Civil War. The painting is in pristine condition despite its age, and retains its original frame, both of which make it a rare find in the market.

Yuchan Kim, WCMA displays purchased artworks requested by students in ‘Acquiring Art for the WCMA’ course, The Williams Record, May 4, 2022